I was. Then I wasn’t. I did play a little of the GTAV story years ago on the Xbox, but last night was my first foray into GTAV Online, and it wasn’t so fun.

I’d heard/read somewhere that in order to be vaguely useful to a crew on a heist, I should try leveling my character up to Level 30+ so that I can get some decent gear and armor beforehand. So I started trying to do that last night, only to have my character get stuck in the initial GTAV Online tutorial

So, I did a race thing and then delivered some drugs to Gerald (which turned into a long drawn car chase and murder because I didn’t read the mission info properly and thought I just had to pick up the drugs, not steal them

). Now Lamar has told me to go buy some clothes which is where I’m stuck. Every time I try to buy something I get a “You have insufficient funds, go buy some more with real money” bollocks message, when I clearly do have plenty enough funds to buy a frikken t-shirt. 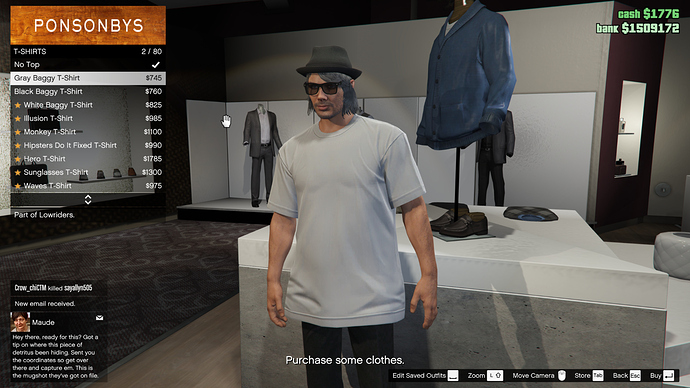 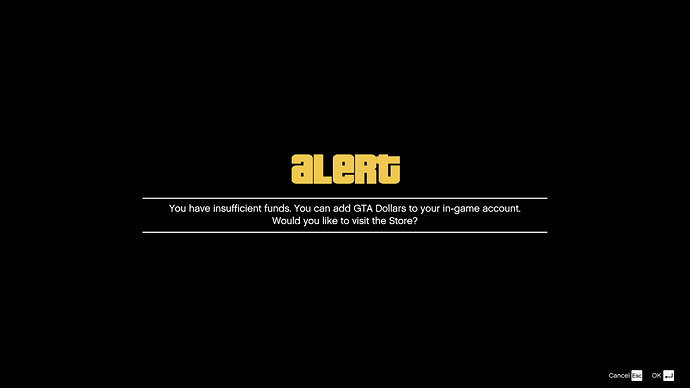 The “Purchase some clothes” prompt says on screen permanently and my GPS keeps trying to get me to go back to a clothes store - which I did at least four different times trying to get it to complete.

In the interim I’ve received a bounty hunter job from a Maude which resulted in me being driven over repeatedly by some random arsehole, and I’ve been sent to meet Lester in a park and started a job with him for an Asian lady - the first part of which tells me to buy an Arcade, which I genuinely don’t have enough money to do. All while the “Purchase some clothes” instruction is still there. Gave up after an hour of trying.

Also, a very minor something I noticed when I was getting repeatedly wasted by that tosser in the bakkie… the game kept reporting my death using my account name (GregRedd) instead of the name i gave my character when I created my douchebag dude (MrRedd - I was going for a Tarantino Reservoir Dogs look 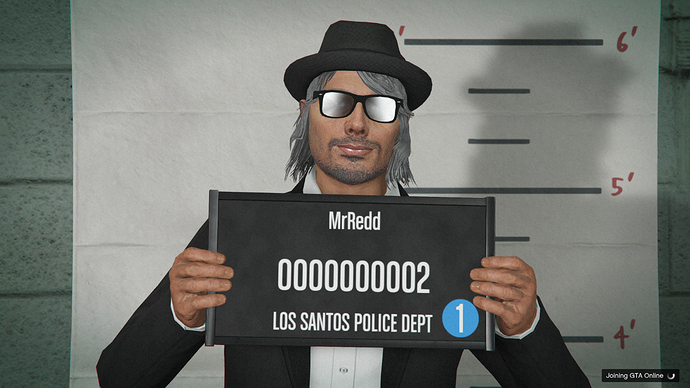 It’s a minor thing, but just curious why the game asks you to name your character, but then doesn’t use that name?

I did not know one can crouch in GTA

The mission in the park for the arcade is to unlock your own casino heist.

can someone invite me to the crew please.
My in game name is weasley

If so, sent you a Friend request, then can invite you to Crew. Or request to join here:
https://socialclub.rockstargames.com/crew/most_epic_win/wall

Jip that is me

I thought that happened when you shaved your beard off @Oltman?

Darnit, busted! Yeah… It was a crew of me and my beard. I had to let it go…

Youtube seems to know I started playing GTA V. And this is my favourite review ever!

Discovered the Casino yesterday. Spent 30 minutes after the tedious intro to the casino cutscene, trying to work out what I had to do to place a bet. Then discovered that I actually can’t play any of the games in the Casino because South Africa…?

Something about gambling legislation and the ability of GTAVO players to buy fake GTA$ with real money which can then be used to buy fake casino chips to use to potentially win more fake casino chips that can then be converted back into fake GTA$. I mean, I can do pretty much exactly that on many other “gambling” games - Zynga Hold’em Poker comes to mind - without an issue, but for some reason it’s not allowed on GTAVO?

If it’s any consolation, we aren’t alone in this:

GTA Online Casino update - List of countries which have banned the Casino...

A lot of you have been tweeting at us and reporting that you cant use the features in the Casino, whether it’s spinning the lucky wheel or trying to play a game of Roulette. You’ll get a message saying ‘This feature is not available for you.’ Well,...

Full list of countries that are banned from playing GTA 5's casino games...

Yup so lame that you cant access or use any of the Casino options. I use a VPN and it by passes that restriction so i can at least spin the wheel

same here. got vpn just to spin the wheel

What? A region restriction is stopping you from spinning an in game casino thing.

Ok, gonna have to get this running on Linux. Guess that means I gotta get the vulkan drivers going…

Edit: that video convinced me