18, but been a while since I played, just got into some venus orb boss content the other night with @SIGSTART

Not bad. Yeah Sig plays alot few times I was online. Maybe if we get a full squad we can do Eidolons

I didn’t realise how much content this game has.

downloaded it this weekend, played past what i assume is tutorial level. did a “get segment” mission. Was slightly annoyed when i found what i thought was a secret area (some maintenance sewer shaft thing) that was completely empty except for red neon boxes that i can’t open (yet?)

I love this game, play it a lot but DAMN it is new player unfriendly. You have to wiki almost everything, the game itself tells you next to nothing.

Possibly. I got to my ship and went to what I thought was next mission or next area. and it ended up being like a social player hangout

Yeah, if you’re a new player getting into Warframe it can be overwhelming. Especially with the two “open world” areas, there is just an immense amount to do now.

@Mottamort and @Deadlypinecone: If you’d like someone to run with let me know. I was guided through the first parts of the game, and in turn guided two of my friends.

It can really help to have a person that gives you direction, and who can be a semi-intelligent voice assistant for the Wiki.

Another useful resource is the new player video guide by a YouTuber called iFlynn:

I do appreciate it, but I’m not 100% sure i’ll get in touch. I do tend to enjoy discovering/levelling up, and I don’t like to be sped-run/boosted (i know thats not what you said, but sometimes for people its the same thing) at a new game. you do end up missing out on experiences. i DID manage to get off the ship/nexus/social thingy and go to the mission and unlocked segment which lets me access marketplace. Around that time I was called away by mates for some CSGO. will play again

If my frame is max rank, does the affinity it would have earned at the end of a mission go to weapons instead or is it lost?

Good to know! I should probably start getting a different frame levelled up then

Tried getting Limbo P, Chroma P and Mesa P. Have the blue prints for all but not the parts. Need to start farming reactant

Logged in yesterday to a 75% off token for platinum. I have many slots now

You are always going to need more. Like I keep vandal and wraith plus prime weapons mostly

I’ve done the first part of the Rising Tide quest and acquired a Railjack fuselage, which is now at around 4 out of 12 hours to repair. There is no way to speed it up — DE is trying to get people to pace themselves. 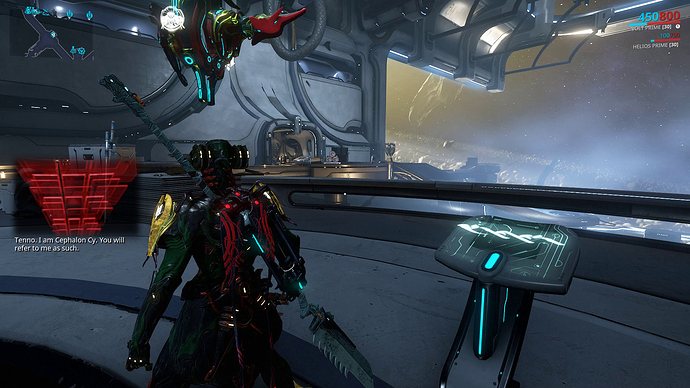 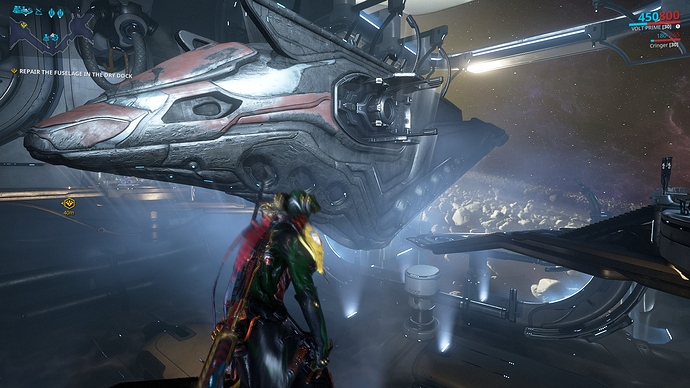 Digital Extremes announced the launch of Warframe: Empyrean at the Game Awards. Here’s the announce trailer:

The update went live on the 13th shortly after the announcement. I’ve been playing through the new missions with my old Warframe crew.

As with all major Warframe updates, it’s still quite buggy, but it is still incredibly fun. Empyrean adds a whole new layer of systems to Warframe, including a skill “tree” and a loot system that involves picking up progressively more powerful items from drops.

For those who don’t know, with Empyrean you get to fly around on a spaceship called a Railjack.

Missions involve shooting down enemy fighters, and infiltrating and hijacking or sabotaging enemy crew ships. If you are high enough level, you can shoot down enemy crew ships with your Railjack using its BFG (a.k.a. massive forward artillery canon).

Sometimes there are additional objectives which involve infiltrating and sabotaging enemy installations — e.g. missile platforms and hangars orbiting a planet.

It doesn’t yet have all the features demoed at TennoCon last year and earlier this year, but DE has put out a separate trailer called “The Journey Ahead” to assure players that all that stuff is still coming.

Empyrean introduces a whole new set of systems for the Railjack including itemization and skills. It’s actually divinely complex.

Your Railjack’s core stats come from components which are the equivalent of “items” for the ship. There are some basic items that you can research and craft from your Dry Dock (this is a room in your “Dojo” — Warframe’s version of the clan hall).

You can pick up better versions of these items in missions, and on the higher level ones some of the stats are randomly generated. This is the first time Warframe has introduced random stats on items, as far as I know.

Warframe has never been a simple game, and Empyrean certainly doesn’t hold your hand.

There are no tutorials and only one or two hints about what you need to do. You’ll need to figure stuff out with your squad, using the announcements and gameplay showed off by Digital Extremes prior to launch.

In many ways, it feels like a beta. This is aimed at fans who have been following the development since TennoCon last year.

Even though we are long-time players that can just about cruise through the other content in the game (even the more difficult boss fights), we failed the first two times we took the Railjack out.

Especially in the beginning, you’re going to need to play with a squad of three or four people. Everyone can pitch in and help with everything, but it helps to divide rolls between players.

Someone needs to fly the ship, someone needs to fight off boarding parties and repair hull breaches and put out fires, someone needs to replenish the resources you use to repair the ship. When the ship is not on fire or being boarded, people can man the side cannons and help shoot down fighters. You also need an away team (often just one person) to take over or scuttle enemy crew ships.

Digital Extremes has said that it will introduce mechanics to make solo play more manageable later, but for now grouping up is essential.

Because I failed at taking screenshots, I only have one cool one of me outside the Railjack, looking at the aurora over Earth after we finished the mission objective. I’ll try to post some gameplay or at least a few gifs a bit later.

As soon as I have my gpu I’m starting this again. Would love to see what they did

Baro Ki’Teer is here this weekend and he’s brought a surprise… Primed Chamber.

Until today, this was the rarest mod in Warframe. It was first introduced as a reward for the top 100 players in the Informant event back in 2013. Since then it has only been handed out as a prize for competitions and random draws.

This put 120 Primed Chambers in circulation, excluding those that may have been created due to bug in the mod transmutation system that briefly existed in Update 10.6… also back in 2013. No-one knew back then just how rare this mod would be.

It seems that Digital Extremes has decided that there is no reason for this mod to remain as ultra-rare as it has been.

This will surely tank the mod’s Platinum price, even though DE has made it expensive to get Primed Chamber (2995 platinum and a million credits).

However, the only people likely to be angry are those who spent thousands or tens of thousands of plat to get a Primed Chamber from one of the lucky few who owned one.

Anyway… if you’re a Warframe player of any seniority, you’ll want to farm some ducats and get this bad boy while it’s available. 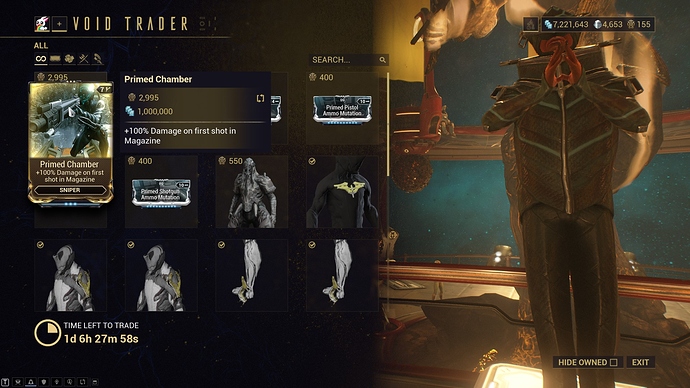