Ahead of the Xbox E3 2019 briefing, the Microsoft store has just been updated with the availability of Xbox Game Pass Ultimate to the general public (it’s been available to selected Xbox Insiders only for a few weeks.)

Also unclear at this stage is how subscribing to the new Ultimate service will affect any existing Game Pass or Live subscriptions you have going at the moment. The store page does say “The purchase of Xbox Game Pass Ultimate automatically upgrades your Xbox Live Gold and Xbox Game Pass memberships” but how that impacts existing subscribers I’m not sure.

UPDATED:
Xbox Games Pass for PC is now also live and available on the MS Store! 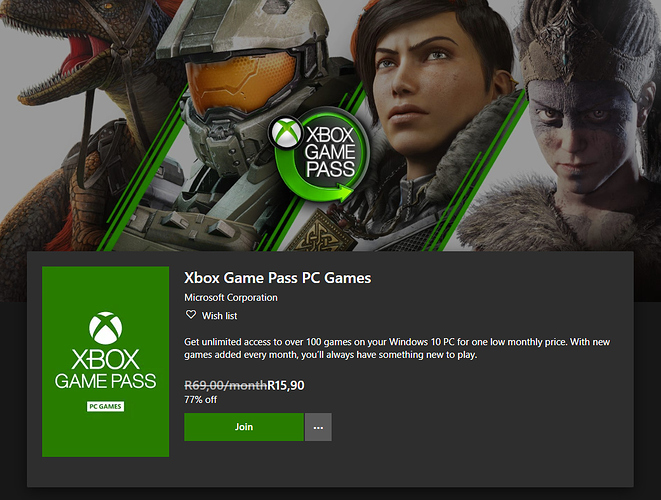 Launch special of $1 (R15.90) for the first month again, then R69 per month going forward. If you’re only intending to play on PC then this is the one for you. Sales page promises “Get unlimited access to over 100 games on your Windows 10 PC for one low monthly price”.

Games are already appearing on the store with the “Included with Game Pass for PC” tag:

Here’s a list of the games that have been found to be included in Game Pass for PC.

Okay, so I can confirm that “subscribing” to Xbox Game Pass Ultimate right now will automatically convert any existing Game Pass or Live subscriptions you may have without any cost - not even the initial 1st month R15.90 fee - and give you Ultimate up until your existing subs are set to expire.

It checks your account for existing subs, gives you a notification before you confirm:

I checked my subs before doing it. I had Xbos Live through until March 2020 (won a 1-year sub off a livestream), and had just recently resubbed Game Pass with the recent 3-month special deal through to August. 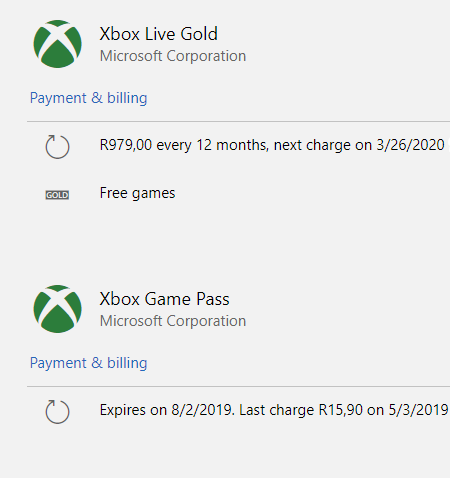 After doing the upgrade, my Live Gold and Game Pass subs have been moved into the “cancelled subscriptions” section, and I have this new one: 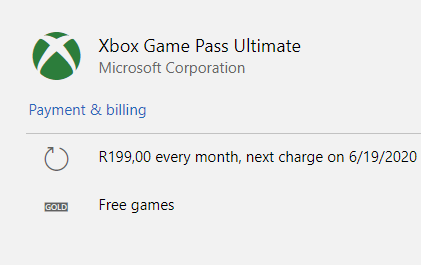 Not sure how it got to setting the renewal to June 2020 - I’m guessing it counts a month for each of the 2 old subs (10 months from Live, 2 months from GPass) even though they overlap. I’m not complaining.

The following PC titles are available on the service now:

Links are US, but should redirect to th SA store. Sourced from Gematsu

Probably an obvious question but do all these games for the PC work through the Windows Store exclusively?

Honestly, I’m damn impressed. That is a very solid list of games to get immediate access to for R69 a month. Microsoft are killing it right now.

I assume so. , and I know the Xbox app for Windows is also about to get a major overhaul - probably out today as well. But how that all ties into the MS Store I’m not sure.

Scratch that first bit - the Game Pass part isn’t a standalone app, it is incorporated into the Xbox App. It is a separate mobile app. I guess we need to wait and see what the new Xbox app does, or if there will be a separate library and launcher for Games Pass.

Cool. Now only if I had R69 a month and uncapped Internet.

Is it also possible to get the files from a friend like with steam, origin etc.?

That’s all I can do or say. But hot damn I love this. Definitely not bad and worth it

Is it also possible to get the files from a friend like with steam, origin etc.?

Not sure about that. I remember that the Forza Horizon 4 installation landed up in some hidden folder, with weird codenames and stuff. I guess it couldn’t hurt trying. May have to do some sort of file verifying thing, but if the game is registered to your account, don’t see why it wouldn’t work.

I’m sure there are many people with way more UWP understanding than me, so don’t quote me on that!

Just checked the details of the new Xbox App for Windows, and yeah, it sounds like it might do what other clients and launchers do:

With the new Xbox app for Windows 10 PCs, play the games you love to play. Browse the catalogue, view recommendations, and discover your next favorite game from a library of high-quality PC games with Xbox Game Pass. See what your friends are playing and chat with them across Xbox console, mobile and PC. You can also purchase great PC titles, DLC, and add-ons from the Store, all in one place.

The apps’ listing is on the Store already, but it still shows as “currently not available” even though the Release date is listed as today.

Good grief! That is an impressive listing of games there, with some really recent titles too! Notably the current early unlocks in the latest Humble Monthly are there, so now I’m not sure if I’ll grab it then.

Also, if this list to be believed, the inclusion of Metro Exodus indicates the first breaking of its exclusivity to the Epic Games Store.

This is so cool! Converting my sub now.

Underwhelming. All the games I would be interested I allready own on steam…

And a couple more to come…

Once Xbox Game Pass for PC formally releases, a full wave of over 100 supported games will be served on Windows 10. All Xbox Game Studios titles on PC will be automatically included on launch day, alongside games from a growing lineup of over 75 partnered publishers and developers. Here are the titles confirmed for the future so far:

Hoooowee. I wonder if all this new competition is making Valve sweat a bit?

Apple was on top of the music world with iTunes until there was a sudden swing from consumers to services like Spotify and Pandora.

As much as I dislike the idea of game subscription services, I suspect I’m in the minority.

Nice! My sub lasts until 4 September so I’m keen to see what comes out up to then.

Nice. Just upgraded my Game Pass (had no Gold) to ultimate and will next incur some costs in May 2020!

This is a list I’m more interested in, especially the AoE games, Halo games and Ori. When they launch, I’m grabbing a subscription.

Well my subs are now converted to Ultimate. You’d be crazy not to get it. This is an absolute steal for the value. And to think that pretty much all the games Xbox showed during their conference is going to be available via Game Pass on day one, why the hell would you NOT get this. Oh and now people don’t need to go through Epic Store to get Outer Worlds on PC, as it will be in Game Pass on day one!!!