From CD Projekt Red, the creators of The Witcher video game franchise, comes a new CRPG based in the universe of the Cyberpunk pen-and-paper system.

From the game’s listing:

Cyberpunk 2077 is an open-world, action-adventure story set in Night City, a megalopolis obsessed with power, glamour and body modification. You play as V, a mercenary outlaw going after a one-of-a-kind implant that is the key to immortality.

Also — they got Keanu Reeves and he told us we were breathtaking.

To anyone interested, you can go over to their twitch stream - https://www.twitch.tv/cdprojektred

They started streaming a few minutes ago with some interesting content. Reddit is already trying to figure out what it all means. Should be really interesting to find out what CDPR is up to

Lol yea. It looks like Base64 code but it could literally be about anything. People are speculating it’s an image.

damn, the game is two years off from release?

till then, I dont give a toss.

This game looks amazing!! And I especially love this particular NPC, particular his name… 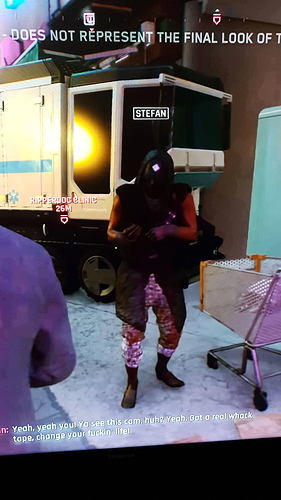 Oooo yes, if this game delivers everything promised in that gameplay footage, it will be something I might just buy on release, contrary to every other game I get 3 years after release. I still remember playing the Netrunner pen and paper RPG. Was amazing.

I kinda wish I never watched that gameplay demo. I don’t know if I can play an RPG without thinking about how it isn’t Cyberpunk.

A void has been created that can’t otherwise be filled.

haha ya Im giving myself 2 months of catch-up hype mongering as opposed to 2 years.

That looks incredible. Kinda like Deus Ex meets Borderlands, but with a vibrant world and strong story.

That’s what I said:

I won’t lie…I was hyped for this game back in 2013 already…I really really hope it’ll live up to its potential, coz wow that gameplay looked awesome.

But CDPR have burned me before, so I’m afraid no pre-orders until I see what it actually comes out like.

But CDPR have burned me before, so I’m afraid no pre-orders until I see what it actually comes out like.

Yea? What they do?

Read the hidden message at the end… But theres no reason to pre-order a game, and if it looks good i’m 100% getting it

Yeah that. Don’t be such a negative nancy, man.

Why care that the game didn’t look as good as it did when we first saw it when it’s common practice in the industry? I’m not saying it’s fine, but the final product played as good as it looked and was one amazing game and that is all that matters at the end of the day. It really wasn’t them (or anybody) being dishonest and burning people. They probably showed what they had available at the time (like now) and it turned out they couldn’t achieve that across the board and had to scale things back a little bit.

I still haven’t watched this (entire) video though. I saw the first 5 minutes and some of the open world stuff only.