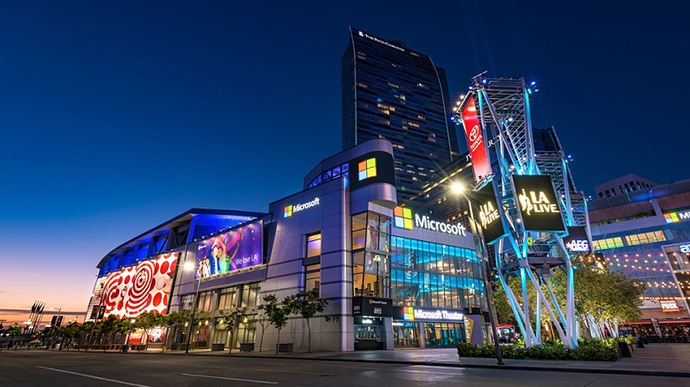 Since Xbox made its first appearance at the Electronic Entertainment Expo (E3) in 2000, Xbox has had a major presence at the show, delivering exclusive and powerful ways to let fans in on what we’re up to, and 2018 will be no different. In fact, it will be our biggest showing ever.

With the evolution of E3, now including fans and extended show hours, we saw an opportunity to create an entirely new show experience reaching E3 attendees and those that are following the show from afar. With that, in collaboration with the Entertainment Software Association, the organizers of E3, we’re excited to announce that Xbox will be taking over the Microsoft Theater, a perfectly situated space located in the heart of L.A. Live and across the street from the Los Angeles Convention Center (LACC).

The Microsoft Theater will be home to official E3 events like the Xbox E3 2018 Briefing on June 10, 2018 at 1PM PT, various Xbox FanFest activities, hands-on gameplay and demos for all E3 attendees and more. Not only does the Microsoft Theater allow us to centralize our Xbox presence at E3, but it’s size enables us to include even more fans and partners in the Xbox E3 2018 Briefing than ever before.

In addition to the Microsoft Theater, we’ll also continue to have a meaningful presence at the LACC with a new booth completely dedicated to Mixer, where you can play, stream and interact with games and catch the latest E3 news live throughout the entire week.

These changes – expanding our presence, multiple venues, taking over the Microsoft Theater – give us the opportunity to bring together a variety of Xbox experiences into one primary location and, most importantly, let fans in on what we’re up to in 2018 and beyond in a fresh new way.

Well, they’re not going to come out and say that their just going to have a small show. Its a make or break E3 for Microsoft, so they have to bring their absolute best.

i think they’re gonna have a slew of exclusives revealed, Phil has been saying that they’re concentrating on their first parties and exclusives so im guessing, there will be a fable cgi type teaser, halo 6 tease, forza horizon 4 tease, perfect dark tease, something from remedy (maybe an alan wake 2), a gears tease from the coalition etc.