Now I know many people are not all that into mobile gaming, but for those that do not know, Google has it’s own game service, similar to Apple Arcade. Called Google Play Pass, it gives you access to many mobile games that you can install onto your Android device, and will be available as long as you are subscribed to the service.

Your pass to hundreds of amazing games and apps, without ads or in-app purchases.

While there are a bunch of recognizable mobile games within the service (all without any in-game adds I might add), you also get access to some great games such as Thimbleweed Park, Terraria, Stardew Vallye, Football Manager 2021, LIMBO, This War Of Mine, Bridge Constructor Portal, The Escapist, Monument Valley, Titan Quest. Games you most probably already have in your Steam library, but now can play on the toilet.

The service has a free month trail, afterwards it is R42/month. I’m giving the free month a trail to check it out and see if it is something to get into or not.

This has been a thing for a while but not available in SA. Glad to see it make its way here. And that is not an expensive option considering as a Google Family admin I van install games on up to 5 devices. Basically, my kids will get to play the games too!

Thank you for sharing! I will be giving the trial a go!

EDIT: this is not games only, but games AND apps!

EDIT 2: Urgh… I will be approving a lot of these in the bear future. My girls are horse bedonderd…

Monument Valley - 8/10
A classic mobile puzzle game that uses perspective and spatial awareness to move the character from the start to the end of the level. The game is purposely built for mobile and plays extremely well. It also looks very good and the sound and music is great. It is very short though, I was able to blaze through the game in just over 2 hours. Definitely a good game to have and definitely one that mobile games.

Mini Metro - 9/10
In this game you connect different stations to each other to deliver passengers to different stations. Stations are marked by shapes, and the corresponding passengers needs to be transported to that station. It becomes fiendishly difficult the further you go through a level. There are a number of levels to choose from, and a number of upgrades to assist your journey. The game is great on mobile, and the controls works very well.

First Strike: Classic - 5/10
Another Steam game that’s on mobile. In First Strike you play as a nuclear superpower nation, and the goal is to bomb the crap out of your opponents. You can build different missiles for offence or defense, and research bigger and better tech to help you in your quest to destroy the world through nuclear destruction. While it is fun, the gameplay loop gets old really fast, and isn’t too fun after the initial few minutes. Fun little time waster on mobile, but ultimately a forgettable experience

80 Days - 7/10
A choose-your-own-adventure style visual novel type game. You assume the role of Passepartout and is tasked to assist Phileas Fogg travel around the world in 80 days. Each leg you choose what to do, explore more routes, buy items, chat to locals, and choose conversation outcomes to create the story you want. The writing is exceptionally well done, and later on becomes rather tense as you fight the clock and other elements to go around the world. It’s also a decent lenght and will take up to 3 hours to complete. Multiple playthroughs are also highly encouraged.

Shiny Ski Resort - 9/10
Kairosoft makes great mobile games. In Shiny Ski Resort, you manage and build a ski resort by adding rooms, decorations, ski lifts and build and research better and more stuff. There are lots of stuff to do, lots of building and upgrades to add, and many items to help make this ski resort the best there is. It isn’t a particularly difficult game, but min-maxing is possible and will be much more involved. There even is a New Game+ after you completed the first playthrough.

Game Dev Story - 7/10
Another Kairosoft game. The concept is simple, manage a game develop studio, and design and build different games for different consoles. The concept is simple and fun, but gets very samey after the first 2 hours or so. After that you’d be making money like it’s nothing, have the best developers and all the upgrades. Definitely fun at the start and definitely one to try out.

Bridge Constructor Portal - 7/10
Exactly similar to the Steam game, you build bridges in the Portal universe. Why? Because GlaDOS says so. The controls work fine, with some issues in long-pressing or normal pressing to do different things in game. But at least it is the full game represented on mobile, so again fun little game to play.

I also signed up, and have been looking for games with controller support. The first game I tried was Dead Cells. Man, this game runs so well and plays so well with a controller! And its perfect for an hour or so on the couch while the PC or TV is being hogged by family!

This is my setup: 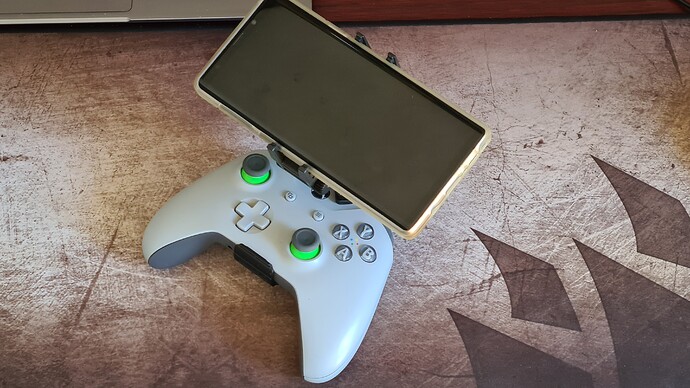 I think next I want to try out Football Manager. Want to see if it comes close to the PC version of the game.

Tried some Rebel Cops! A great turn based tactical police game, where your squad takes out criminals without all the fuss of proper police procedures. It reminds me of Police Quest SWAT 2. Or even XCOM, but set a little more in reality. Works really well with touch screen and the game is gorgeous!

Does this Play Pass only work for their games and apps library, or is it only a curated list? Does it include anything from the Books and Movies libraries?

Think I know the answer, just thought I would ask.

It includes everything. Even games on iPhones. Movies before they reach the cinema and books that haven’t been written yet.

And the most sarcastic award goes to…

Haha @Beo and I are just joking around.

Dude I tried out Rebel Cops, and it’s pretty awesome! I’m not really an XCOM fan but the game played very well on mobile.

Also, I REALLY like playing games on mobile where there isn’t a single ad or anything.

there isn’t a single ad or anything

Here is another round of games tried out on mobile:

Doodle God - 5/10
Its a fun game where you mix elements to create other elements and other materials. As you create these you fill the world with stuff. There is a lot of challenges to complete as well. It’s fun, but the combinations are not always intuitive, the interface is sucky and over the top, and some bad design in some places.

Football Manager 2021 Mobile - 7/10
I don’t know anything about football, and this game brought that out. My word, this is the FULL game you get on PC, and is as complex and detailed as you would expect. The interface is very well designed and easy to navigate on mobile. I’m just not smart enough to play it. It’s very overwhelming.

Tiny Robots - 8/10
A puzzle game played out on small stages you explore to find items and solve the puzzle. It looks gorgeous and is very well built for mobile. The pacing is a bit wrong, the game goes from being very easy to being optuse. But fun nevertheless.

Gem Miner: Dig Deeper - 3/10
For a game where you dig deep for valuable things, this game is shallow and boring. Very simple, easy to play, but has the gameplay depth of an anti-vaxxers brain.

OK Golf - 5/10
Never has a game lived up more to its name. You play golf and it’s okay at best. The courses and good enough and mechanics fun, but meh gameplay overall.

I found the best game so far on Google Play Pass: Agent A

it is on Steam, and I’ve never heard about this game:

It is a point and click adventure game where you solve puzzles to try and catch a master spy, and everything about this game is extremely good. Last night I accidentally played almost 3 hours of this damn game on mobile, and if you have this service, download it now!!

I just finished it. Binged the crap out of it. Best mobile game I’ve played ever. A solid 10/10 in my books. Some puzzles are too obscure, but from all of then, there was like 2, maybe 3 that were not obvious or something that couldn’t be logically deduced. Loved it!

@DieGrootHammer and @oltman
Are you guys still running and active subscription and are you still actively using it and getting value from the service?

Do you guys only use the service for their games or other services as well?

And lastly, how has your perspective of the service been or changed now that you have a kid @DieGrootHammer ?

Yes, still have an active sub. I play the odd game every now and then, but its main value is in letting the kids play games without some really questionable adverts in the so called “FREE” games on the Play store.

I have an active subscription but I find their interface really annoying to navigate and I hate that you can’t see what’s part of the service on the desktop website, I normally like to browse and install games from there.

Yes that is something that annoys me too. But somehow my kids manage to still find the worst possible games on the platform