Referring to any hardware, be it pc or gadget’y. Preferably, after you’ve sorted out your conundrum, but hey, if you want to laugh at yourself while you’re experiencing it, by all means, share it.

I have to premise this, with I’m a seasoned veteran of hardware. I’ve sold it. I’ve fixed it. I know what I’m doing. Which makes this all the more idiotic…

I think it was the beginning of last year

. I had upgraded to AMD Ryzen 2700x, and been using it for a while, when i noticed it was running mildly warmer than normal, and the cables were annoying me, along with the fact that the AMD logo was upside down. So i thought, it’s saturday, time to spend it fixing it.

Proceeded to unplug pc, put it on the desk, and open up. Unclipped the heatsink cooler, and pulled. It came off with a tad more resistance, than I expected. I looked down. and the CPU was missing

For the uninitiated, AMD has an antiquated locking mechanism, that consists of 2 plastic plates, with holes on both, for all the CPU pins. When it’s open, the holes are aligned. Closing the lock bar, shifts the 2 plates skew, so that the holes grip the pins on the CPU.

So, it hadn’t gripped the CPU enough, for it to stay in the socket, when I pulled. I looked closely at the CPU pins. Some were skew.

So i grab the CPU to pull it off the heatsink. And it doesn’t budge. Jesus, it ain’t moving. In fact, it would be easier to remove Karen from a protest march.

I go look for the wife, ask her where the hairdryer is. She looks at me like, maybe she made a mistake, that fateful day long ago, when she said, I do.

5 minutes later, I’m sitting with the hairdryer on low heat, trying not to burn myself, while pulling on the CPU. It gives way suddenly. I lose grip on the CPU, it flips up in the air. I had thoughts of Interstellar, and 7 years to 1 hour, while it did acrobatic moves in slowmo. It lands on the keyboard. I sit in shock at how the fuckup fairy is laughing at me at the moment. I grab the CPU, and look at it, the pins are still bent slightly, but now there’s some CPU paste on the edge, and some of the pins. I spend the next 2 hours with a magnifying glasses bending the 6 or so pins straight and cleaning the paste off.

Fast forward till today, I did take it off again, and went watercooled. No issues since, and it runs brilliantly, but it still stings when I think back to that day. Fuck that day, and the horse it road in on.

My worst memory, buying a setup for a client, assembling it and it doesn’t want to work. Panicky I sit there swearing, wife walks in and picks up the little packet that had the mobo screws in and asks: “these little rings, what are they for?”

I realised later that she was right, I had bought a mobo/case that was not insulated on the panel that connects to the mobo, the little rings were not just risers but also insulation.

I never discounted anything my wife said again.

There is nothing more terrifying that putting together a new build, pushing the power button and not having it turn on…

Been there done that.

My Sapphire Vega 64 Nitro+ came with a support strut you can add to lessen the strain on the PCI Express slot. The guy I bought the card from hadn’t bothered with it but I thought I’d better do things right and use it.

The fans on the GPU only run when it’s doing some demanding tasks so on those occasions I noticed a slight clicking/knocking noise. Nothing major but I wondered what was up with the card, had I purchased a faulty GPU? Once I’d figured the noise was related to the fans spinning up I went into Radeon Settings and played around with the fan speed. Idiotically I chucked the fan speed all the way up and the sound that came from my case was horrendous, the clicking turned into a snapping and a grinding and the worst part… silence. Oh man… I killed the GPU. Turned everything off and opened up the case - with a heavy heart.

Turns out that I had messed up with the support strut and it was making contact with one of the GPU fans - hence the clicking sound when they turned on. When I yeeted the fans manually the impact of the fan blade onto the support strut snapped off a piece of it, that bit must have been the cause of the rattling and grinding.

Funny thing is the piece of the blade that broke off is minuscule, you can barely notice it, and the fan still spins perfectly, the GPU is still powering on doing a great job. Grateful prayers were said that day. But I will never forget that awful sound…

Also, I don’t use the support strut. Placed properly it would certainly be fine but I’m not going to take that chance.

This happened today. . . . I will not talk about it. . . .
I get home from the fresh windows install. Plug everything in, get going but get this notification… 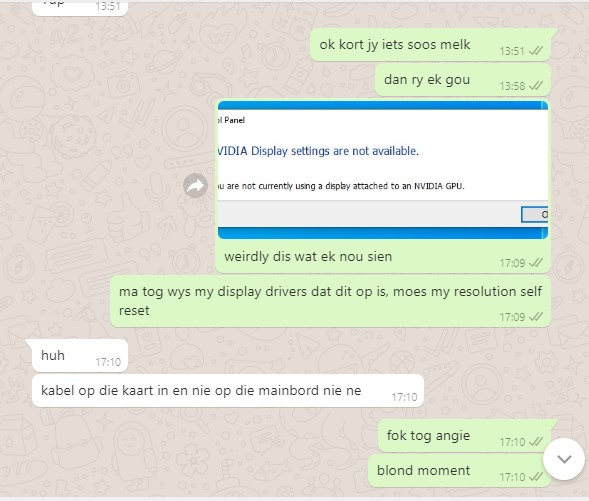 I even understood it.

Been there done that.

Done this too. Especially freaky when your last part arrives late in the evening and you build until late.

There is nothing more terrifying that putting together a new build, pushing the power button and not having it turn on…

Yep, and the problem with upgrading is that the components from the old build isn’t compatible, so I can’t even determine which component is the issue. Last time I had to take it to Evetech to determine that the specific brand of RAM was incompatible with my mainboard.