Prompted by discussions over in the Formula 1 thread about the recent confirmation that Fernando Alonso will drive a South African prepared Gazoo Racing Toyota Hilux in the 2020 Dakar Rally, @Oltman and I thought it would be a good idea to start a separate thread dedicated to news and discussion around the world’s toughest offroad event.

What is the Dakar Rally?

The Dakar Rally (or simply “The Dakar”; formerly known as the “Paris–Dakar Rally”) is an annual rally raid organised by the Amaury Sport Organisation. Most events since the inception in 1978 were from Paris, France, to Dakar, Senegal, but due to security threats in Mauritania, which led to the cancellation of the 2008 rally, races from 2009 until 2019 have been held in South America. From 2020, the race will be run in and around Saudi Arabia for at least the next 10 years.

The race is open to amateur and professional entries, amateurs typically making up about eighty percent of the participants. There are 5 competitive vehicle categories contested currently: Motorbikes, Cars, Quads, UTVs (Side by Sides/SxS), and Trucks

The race is an off-road endurance event. The terrain that the competitors traverse is much tougher than that used in conventional rallying, and the vehicles used are true off-road vehicles rather than modified on-road vehicles. Most of the competitive special sections are off-road, crossing dunes, mud, camel grass, rocks, and erg among others. The distances of each stage covered vary from short distances up to 800–900 kilometres per day.

A Brief History of the Dakar Rally 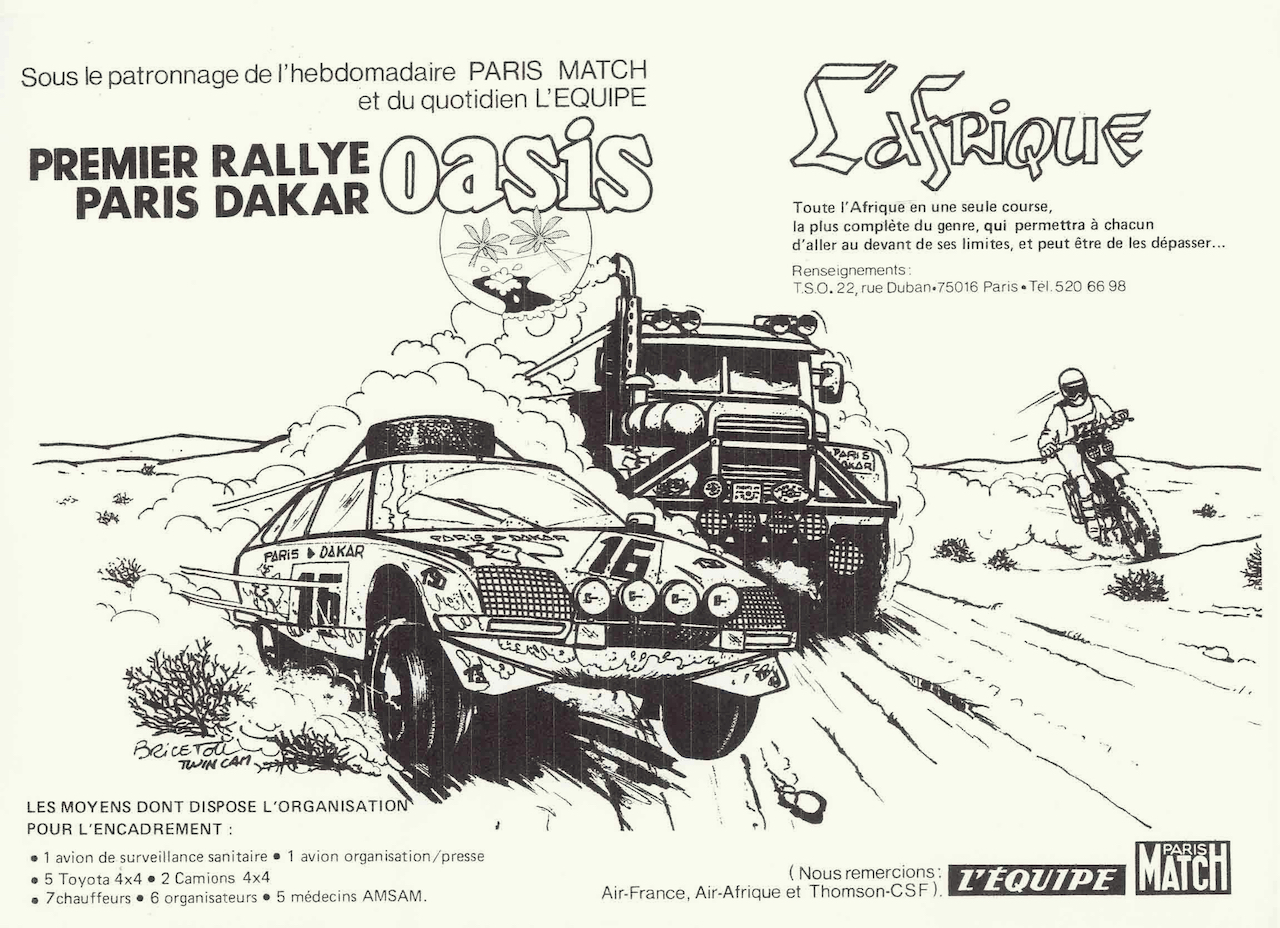 1280×928
The race originated in December 1977, a year after Thierry Sabine got lost in the Ténéré desert whilst competing in the Abidjan-Nice rally and decided that the desert would be a good location for a regular rally.

182 vehicles took the start of the inaugural rally in Paris, with 74 surviving the 10,000-kilometre trip to the Senegalese capital of Dakar. Cyril Neveu holds the distinction of being the event’s first winner, riding a Yamaha motorcycle. The event rapidly grew in popularity, with 216 vehicles taking the start in 1980 and 291 in 1981. 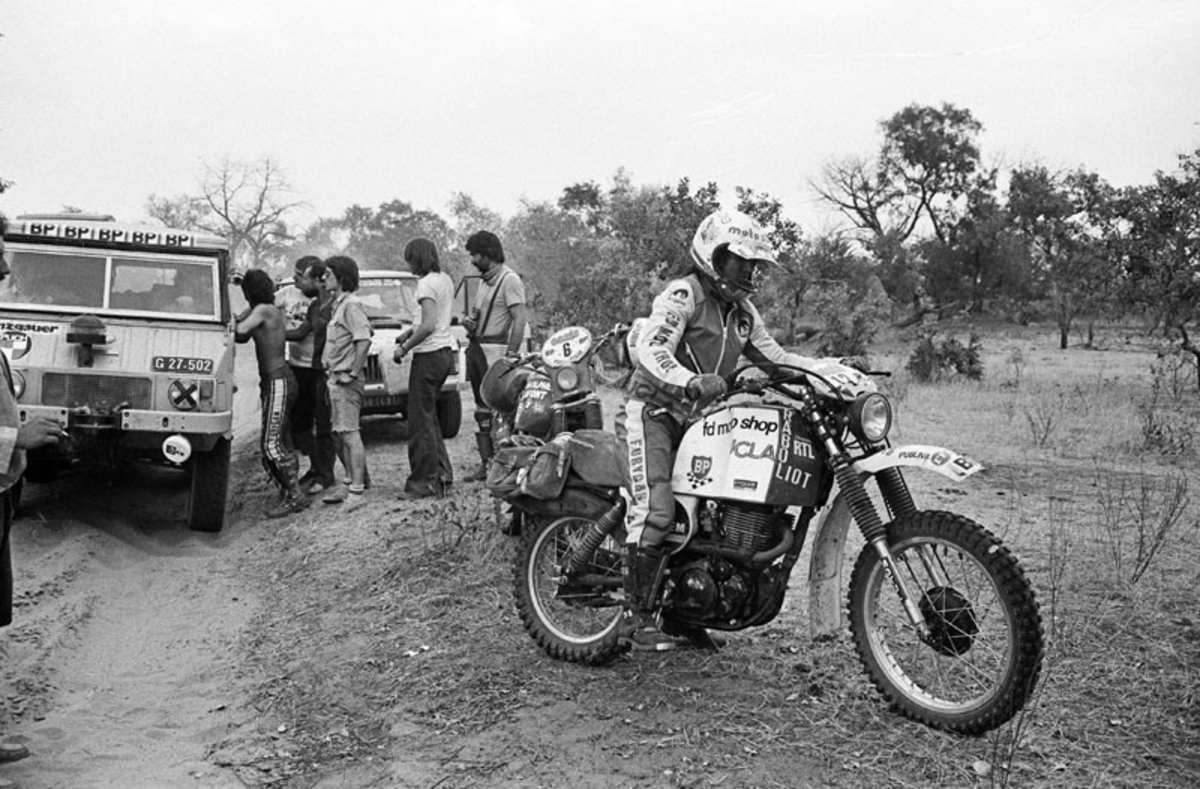 1200×789
Neveu won the event for a second time in 1980, Hubert Auriol taking honours in 1981 for BMW. By this stage, the rally had already begun to attract the participation of famous names from elsewhere in motorsport, such as Henri Pescarolo and Jacky Ickx.

Now boasting 382 competitors, more than double the amount that took the start in 1979, Neveu won the event for a third time in 1982, this time riding a Honda motorcycle, while victory in the car class went to the Marreau brothers, driving a privately entered Renault 20, whose buccaneering exploits seemed to perfectly capture the spirit of the early years of the rally. Auriol captured his second bikes class victory in 1983, the first year that Japanese manufacturer Mitsubishi competed in the rally, beginning an association that would last all the way until 2009.

https://somosdakar.com/wp-content/uploads/2017/03/ae38abd9a32e35095e45aa98c1639c53.jpg
At the behest of 1983 car class winner Jacky Ickx, Porsche entered the Dakar in 1984, with the total number of entries now at 427. The German marque won the event at their first attempt courtesy of René Metge, who had previously won in the car category in 1981, whilst Ickx finished sixth. Gaston Rahier meanwhile continued BMW’s success in the motorcycle category with back-to-back wins in 1984 and 1985, the year of Mitsubishi’s first victory of 12 in the car category, Patrick Zaniroli taking the spoils.

The 1986 event, won by Metge and Neveu, was marred by the death of event founder Sabine in a helicopter crash in Mali, his father Gilbert taking over organisation of the rally. The race continued to be held in Africa annually in early January of each year until 2008.

The 2008 Dakar Rally was cancelled days before it was due to start due to security concerns after al-Qaeda’s murder of four French tourists on Christmas Eve in December 2007 in Mauritania (a country in which the rally spent eight days), various accusations against the rally calling it “neo-colonialist”, and al-Qaeda’s accusations against Mauritania calling it a supporter of “crusaders, apostates and infidels”.

The French-based Amaury Sport Organisation in charge of the 6,000-kilometre rally said in a statement that they had been advised by the French government to cancel the race, which had been due to begin on 5 January 2008 from Lisbon. They said direct threats had also been made against the event by al-Qaeda related organisations.

Omar Osama bin Laden, the son of Osama bin Laden, attracted news coverage in 2008 by promoting himself as an “ambassador of peace” and proposing a 3,000-mile horse race across North Africa as a replacement to the Dakar Rally, with sponsors’ money going to support child victims of war, saying “I heard the rally was stopped because of al-Qaida. I don’t think they are going to stop me.”

From the 2009 edition the Rally moved to South America, where it has been run since. With some irony, South Africa’s own Giniel de Villiers won the first Dakar Rally to be run outside of Africa. 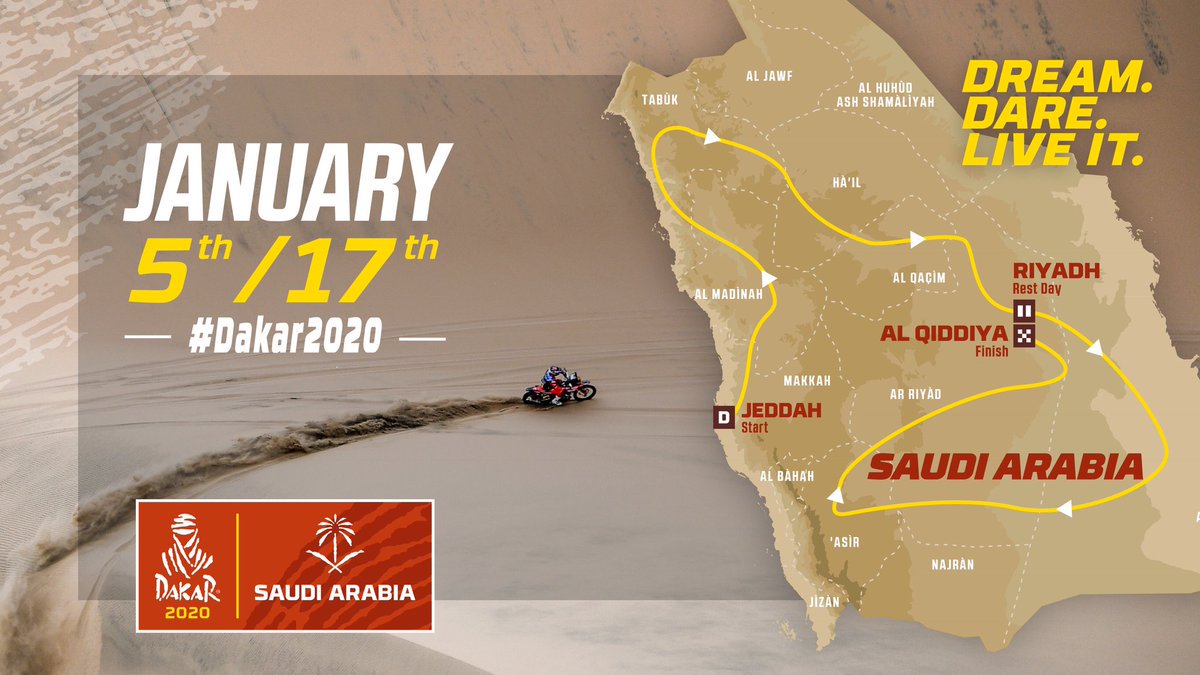 1554526-6459245081200×675 122 KB
Dakar Rally 2020, which is scheduled to start in the port city of Jeddah in western Saudi Arabia on January 5 and eventually finish in Qiddiya southwest of the Saudi capital Riyadh on January 17 after having swept across the Kingdom through 10 challenging stages.

The grandiose and varied landscapes of the 30th country to host the Dakar have all the ingredients for a well-rounded route. The same diversity characterises the three cities that will mark the decisive phases of the rally. Jeddah symbolises the country’s deep historical roots, while the capital Riyadh evokes the power of a kingdom resolutely turned towards the future, as exemplified by the Qiddiya project.

Home to 3.5 million people, the second-largest city in the country is also its economic heart thanks to its commercial port on the Red Sea, which goes back to the 7th century. Just for once, the gateway to the holy cities of Mecca and Medina will also be a launch pad for the drivers, riders and crews of the Dakar. King Fahd’s Fountain, which ejects water at a speed of 375 km/h, and Jeddah Tower, which will soon reach a height of 1,001 m, will inspire the competitors with grandiose ideas and a burning ambition.

The sprawling orchards that gave the city its name («gardens» in Arabic) in the 18th century have mostly given way to an urban area extending over more than 1,500 km2 (versus 105 km2 for Paris and 203 km2 for Buenos Aires) and home to over six million people. The demographic growth of the capital since the 1970s has gone hand in hand with the building of striking skyscrapers born from revolutionary architectural ideas, including the 267 m Al Faisaliyah Centre, 302 m Kingdom Centre and 307 m Burj Rafal.

The Dakar will be the first world-class sporting event held in Al Qiddiya, a city whose foundation stone was laid in 2018 and which will be focused on entertainment and culture. The vast complex, located about 40 kilometres from Riyadh, will include attractions such as a theme and amusement park, world-class sports facilities and multidisciplinary art centres. It is set to open to the public in 2022. 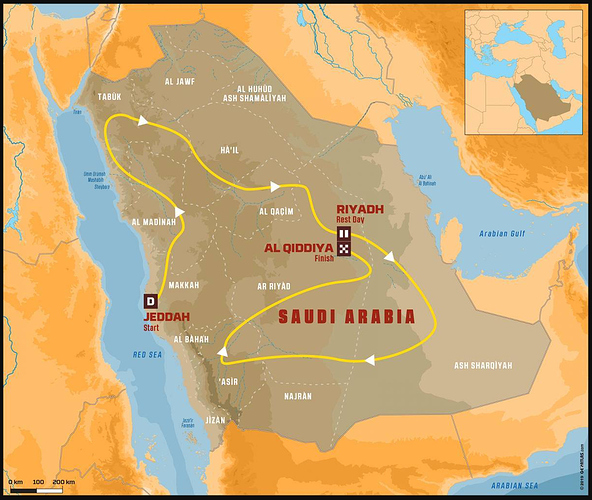 This is so thorough you may close the thread!

great read and, as always, very informative! Thanks G-man

So with the new year we get again this awesome race of endurance and time.

I do know it takes place 5th to the 17th of Jan. So come grab a beer and let’s discuss it

The Dakar Rally Thread Prompted by discussions over in the Formula 1 thread about the recent confirmation that Fernando Alonso will drive a South African prepared Gazoo Racing Toyota Hilux in the 2020 Dakar Rally, @Oltman and I thought it would be a good idea to start a separate thread dedicated to news and discussion around the world’s toughest offroad event. What is the Dakar Rally? [image] For the unenlightened… The Dakar Rally (or simply “The Dakar”; formerly known as the “Paris–Dakar Ra…

Going to be adding to that thread from tomorrow…

Sorry I jumped the gun

We can just delete this topic or link them

There are a number of ways to follow the 2020 Dakar Rally.

2020 Dakar – Official application Follow the 2020 Dakar live on your smartphone! Get the latest Dakar Rally news for free. The most famous and most difficult rally-raid in the world will take place from 5 to 17 January 2020. This year, the Dakar will take the competitors to Saudi Arabia. Discover the finest details of the route, the classifications, rider/driver profiles, latest videos and photos as well as all the information about the race on the official 2020 Dakar application. The app in... 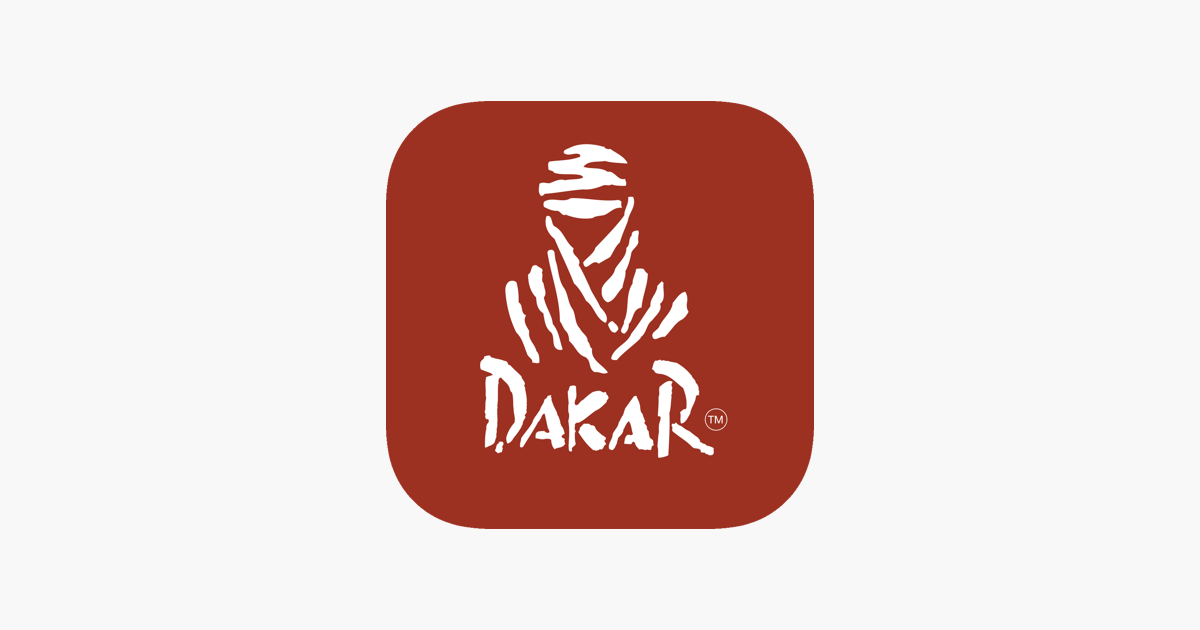 The apps or site can be used while each day’s Stage is live to monitor live timings and checkpoint times.

Red Bull (who sponsor a number of this year’s top contenders in the bike and car categories) have a Dakar sub-site up. They use it to post news and videos, with a new episode going live each day at 6PM (starting today):

And finally, if you’re fortunate enough to have access to a DSTV Premium account, the daily highlights show will be broadcast each night at 7:00PM on Supersport 6, with a number of repeats throughout the day following.

The first Highlights show will be on this evening to cover the Start Podium procession that happens today. So if you want to catch Fernando waving to the crowd, SS6 at 7.

Dakar 2020 has already claimed it’s first casualty… before racing has even started!

Martin Kolomy somersaulted his Ford Raptor 4x4 end over end during a pre-race shakedown run yesterday. He has been hospitalised with injured vertebrae, tweeting from his hospital bed: “Compressed 3rd vertebra and 2nd cracked. Now they’re wondering what to do with me! But I’ll be fine. Thanks to everyone for the support messages… they make it a lot better.”

WATCH | Here's everything you should know about the 2020 Dakar Rally

Arguably the world’s toughest rally raid starts on Sunday, January 5, and for the first time, it takes place in Saudi Arabia after ten events in South America. 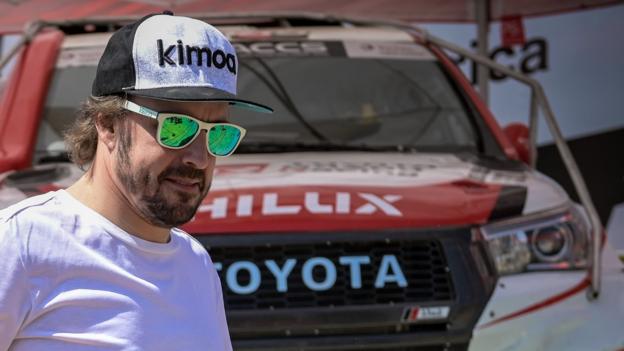 Fernando Alonso: Dakar Rally challenge is 'biggest of my career'

Two-time Formula 1 world champion Fernando Alonso embarks on the Dakar Rally on Sunday - but can he make the “impossible look possible”?

Do we know when they start? 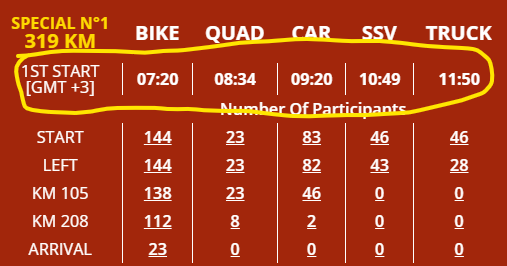 In fact, the first bikes are already through the Arrival Waypoint - Toby Price (last years winner) wins Stage 1 with a 2m05s lead.

The leading cars are through halfway on the Stage, with Al-Attiyah (again, last years winner) 6m16s clear of Peterhansel and already over 20m ahead of Nani Roma at the 208km waypoint, with about 100kms still to go on the stage. 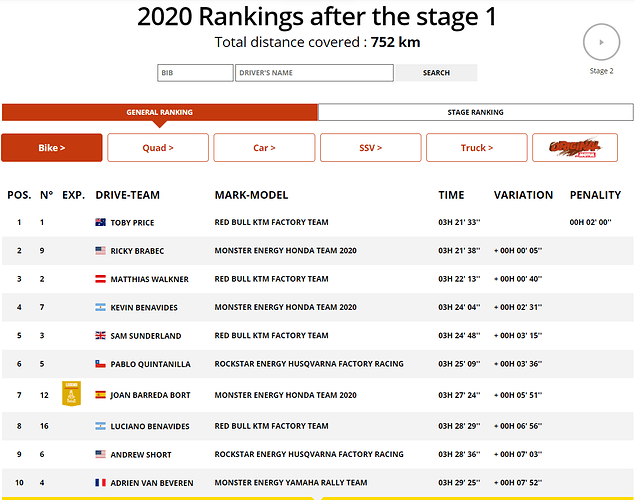 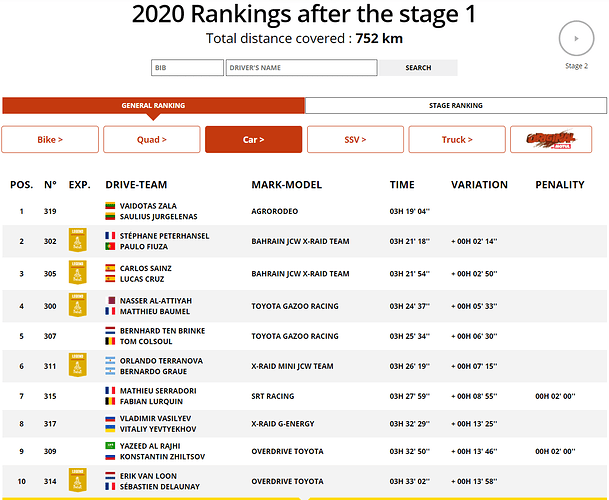 Today’s Stage 2 between Al Wajh and Neom with a 367km Special Section is well under way. 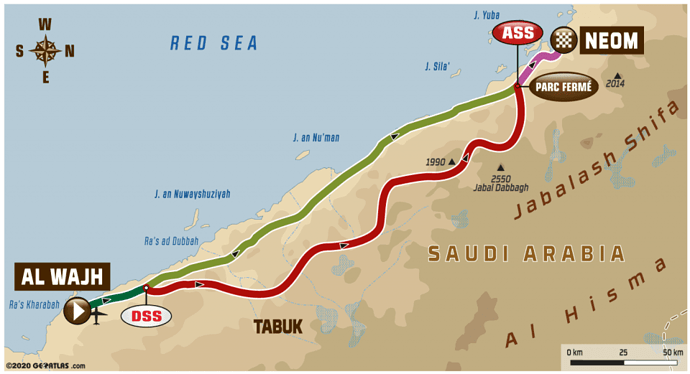 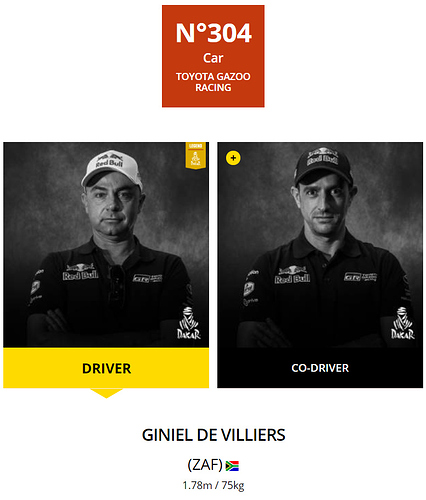 image.jpg778×912 122 KB
De Villiers finished the stage almost 4 minutes ahead of Terranova, and moves from 14th to 6th in the General Classification. Terranova in turn moves himself from P6 into P1 on the GC.

And then a huge shoutout to our Northern neighbour - Botswana’s Ross Branch who won today’s Stage 2 on his KTM. 2020 is only his 2nd Dakar. He finished 13th overall last year as the Best Rookie. 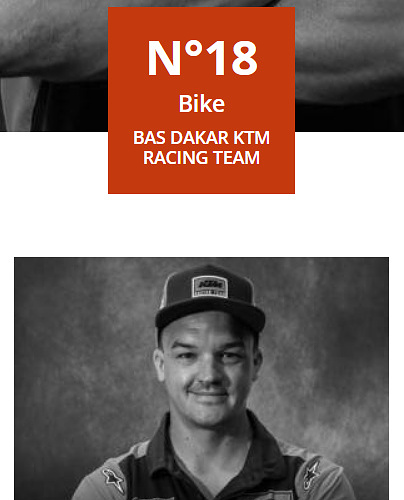 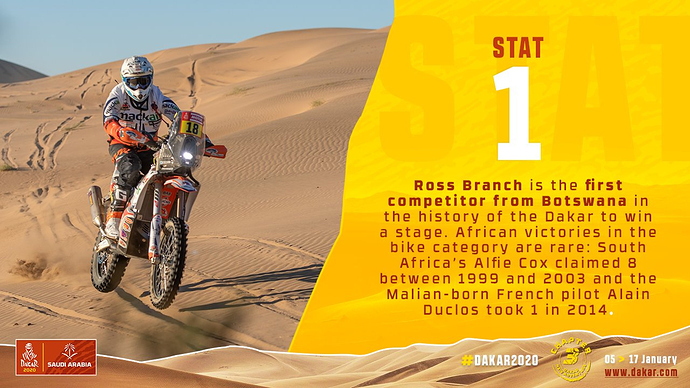 Also, trouble for our F1 friend Fernando today. No details available yet, but an early report did say that he’d stopped for 20 minutes just after WP3. After being P8 and only 6 minutes behind the stage leaders through WP3 (159km), he is yet to check-in at WP4 (260km) and is now an hour behind the leaders.

Alonso is moving again! Just gone through WP4, now 2h30 behind on the stage. He had “broken a wheel” and was forced to wait for his service crew vehicle to arrive to make repairs. Coming from a world of 2 second pit stops, this delay must have been driving him mad

📣UPDATE: South African @mareaaron will not take part in the second stage of the Dakar 2020. The Monster Energy Honda Team rider dislocated his left hand after yesterday's crash and has decided not to put himself at risk. Get well soon! #Dakar2020 🇸🇦
2 Likes
next page →