The Empire Struck Back 40 Years Ago 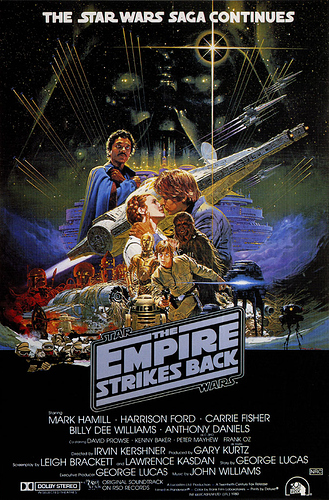 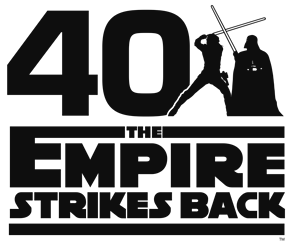 “When it came time to open Empire, there was tremendous excitement and everybody agreed we should try something that had never been done before. So we opened it at the Egyptian Theater in Los Angeles at midnight—and then kept running it without stopping for one full day.”

Episode V, as it eventually became known, was the second Star Wars movie released and a sequel to the original with a storyline set 3 years after the events of the first film. It’s since become recognised as one of the rare occasions in cinema where the sequel is better than the original

ESB remains the highest rated Star Wars film on IMDB, and is regularly included in “Greatest Movies of all Time” type lists.

It’s also the Star Wars movie that introduced us to Yoda, and produced many of the most memorable scenes and quotes in the franchise.

Here’s two quick video recaps of the movie, the second with commentary:


And some of the best quotes from the movie:

Princess Leia: Why, you stuck up… half-witted… scruffy-looking… Nerf-herder!

Princess Leia: I love you.
Han Solo: I know.

C-3PO: Sir, the possibility of successfully navigating an asteroid field is approximately 3,720 to 1.
Han Solo: Never tell me the odds.

Yoda: Size matters not. Look at me. Judge me by my size, do you? Hmm? Hmm. And well you should not. For my ally is the Force, and a powerful ally it is. Life creates it, makes it grow. Its energy surrounds us and binds us. Luminous beings are we, not this crude matter. You must feel the Force around you; here, between you, me, the tree, the rock, everywhere, yes.

Darth Vader: I am altering the deal. Pray I don’t alter it any further.

Emperor Palpatine: There is a great disturbance in the Force.
Darth Vader: I have felt it.

Darth Vader: You have failed me for the last time, Admiral!

Princess Leia: I have a bad feeling about this…

It truly is a remarkable piece of cinematic history and a popular culture icon for the ages.

(To make up for my Imperial March tease the other day, here’s the man himself, John Williams, conducting the Los Angeles Philharmonic, complete with an appearance from Storm Troopers and Lord Vader…)

And no retrospective of The Empire Strikes Back would be complete without acknowledging it as the start of the greatest Xenobromance ever!

Or without including the work of the Bad Lip Reading team:

“THE EMPIRE STRIKES BACK: A Bad Lip Reading”

“SEAGULLS! (Stop It Now)” Lyric Video – A Bad Lip Reading of The Empire Strikes Back

Epic movie, and definitely my favourite of all the Star Wars movies.

And Seagulls… is the bestest best thing

And no retrospective of The Empire Strikes Back would be complete without acknowledging it as the start of the greatest Xenobromance ever!

I watched it 2x at the Durban ice rink cinema when I was a kid. I think that was the day my nerdgene got activated. Before that I was reading Trompie en die boksem bende. At the end of that year (grade 7), I was doing the first of my read throughs of LOTR.

We went to the drive-in to see it.

But Ice Rink Cinema? I’m Canadian, and I’ve never heard of such a thing! I’m intrigued!

There is an ice rink building that also happens to have a cinema next to it but everyone knew it as the ice rink cinema.

The whole fact that there is an ICE rink in the heat of Durban was a bit of a weird thing.

Also, there was a rive-in just across the road from the ice rink too. Aw, the good old days!

When I was there in March last year with my parents, both ice rinks in the area had melty patches.

And so does the one in the lowveld where I play hockey. This country is just too dang hot

They just need to throw more power at it. Oh wait…