The time has come. It is time for the first round of voting in our annual MEW GOTY awards. Here we will be voting for the best game that made you forget about the pandemic, and experience a different side of the world this year.

Below is a list of 10 nominations. You can vote for as many of them as you want. The top 5 will progress to the final round of voting that will happen next week. Should you feel there is a game missing from the list that needs to be added, please feel free to discuss it in the comments below. The extra game with the most likes from the community will join the top 5 in the final round of voting.

Here is the poll:

For me it was Gwent. Played so much of it during lockdown. 200 hours or so.

This can only be Animal Crossing. That game came out at the perfect time. The whole world was snapping up Switch consoles and copies of the game.

I spent almost 300 hours on Persona 5 Royal during lockdown. I was going to wait until it was on sale to get it, but I ended up getting it at launch since lockdown had just begun, and I was ‘doing my part’ staying at home

Why is Plague Inc not on here…

Where is Fall Guys??? 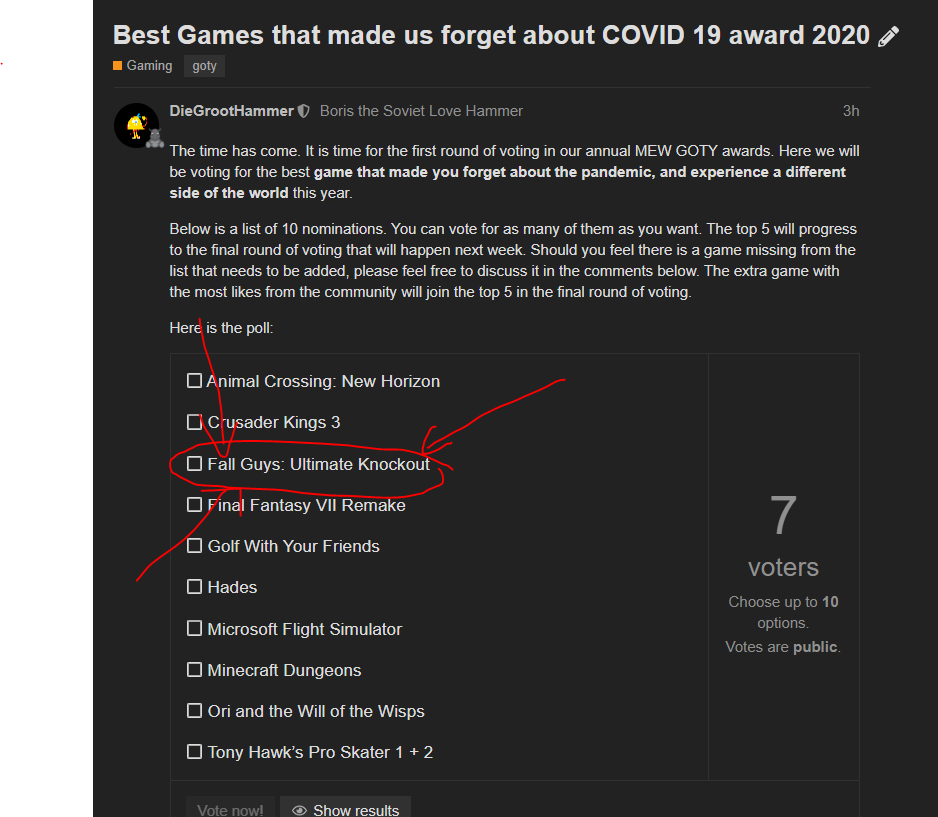 Thanks, found it… Ahem…

Aha! Yes, Animal Crossing can win this and then Hades can win on Switch wishful thinking.

EDIT: I just realised that I have committed the cardinal sin of not reading the OP before commenting. At least @GregRedd has read and followed @DieGrootHammer’s careful instructions (in other threads topics).

Where I’ve noticed, I’ve edited people’s posts asking for games to be added to the list to a nomination for that game.

Remember folks: One extra game per post, like only those extra nominations that you want on the final ballot!

Oh yes!!! Completely forgot about that. But wasn’t it released in 2019 already?

Oh crap! I saw “Golf With Your Friends” and assumed we could nominate old games in this category. Let us know if we’re missing the plot, please @DieGrootHammer.

Don’t think that counts for this category - the one’s where it does @DieGrootHammer has added “released in 2020” after his description. For this one I think the idea is to nominate the games that got you through lockdown, regardless of when they came out.

And then spam the Like heart on all my suggestions!!

Well then it was certainly Borderlands 3… It’s primarily what I played during lockdown.

Golf with your Friends received its 1.0 fu release during 2020, which is why it is within the lists. This category has more the aim at picking 2020 released games that came out and assisted the world with dealing with COVID.

Then forget my nomination, since its all I played