*I could have sworn we had an Evil Genius 2 topic started somewhere?* 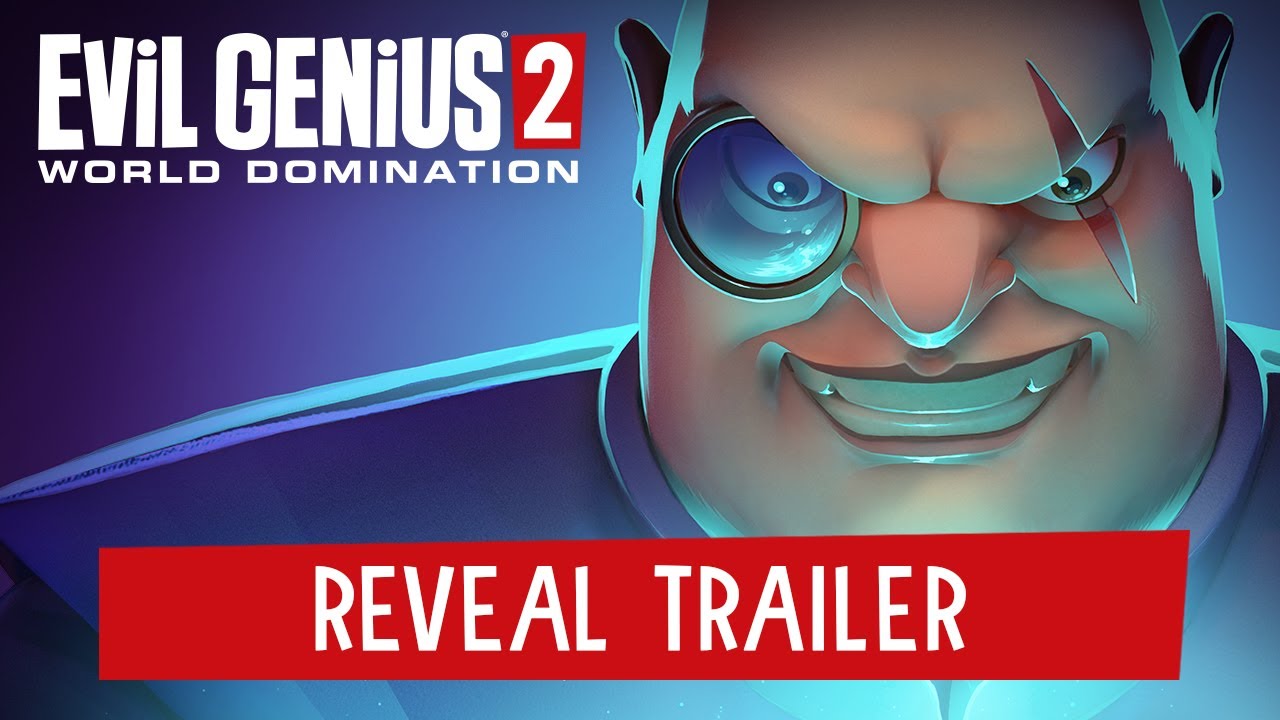 Originally due to release later this year, EG2: WD has just become the latest game to be delayed due to COVID-19 complications. Developers Rebellion made the announcement earlier today: 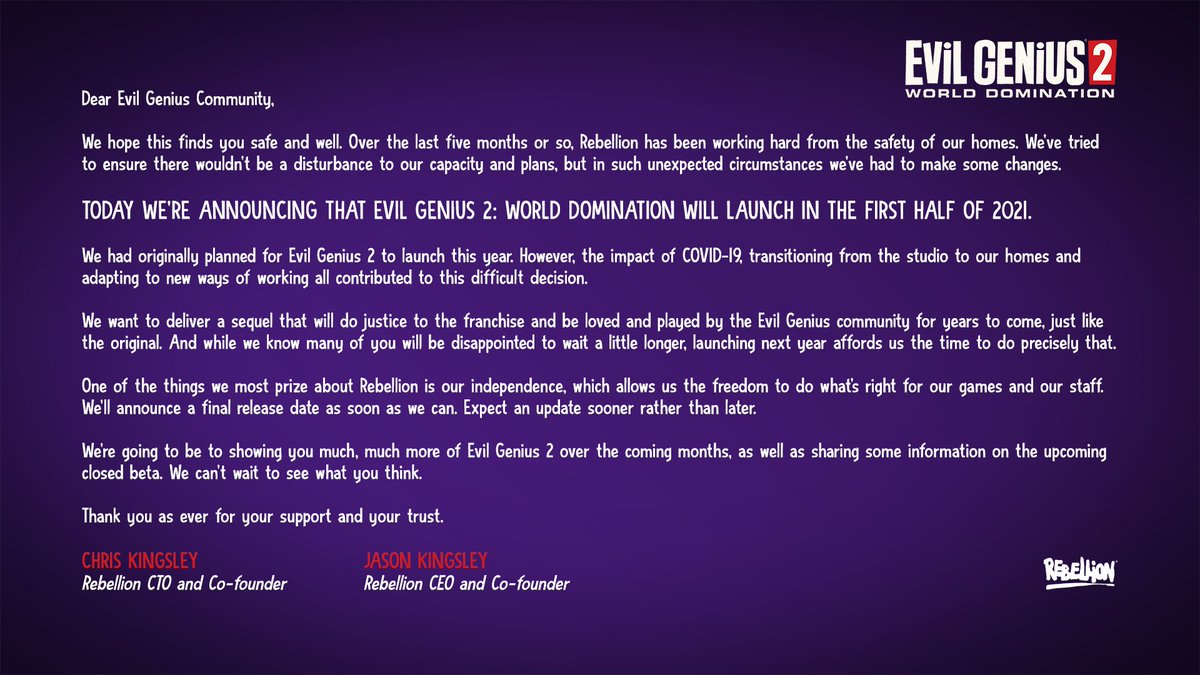 We hope this finds you and your loved ones safe and well.

Over the last five months or so, Rebellion has been working hard from the safety of our homes. As of now we’re only just beginning to welcome a handful of our staff back into our studios.

It’s been a challenging time. We tried to ensure there wouldn’t be a disturbance to our capacity and plans, but in such unexpected circumstances we’ve had to make some changes.

Today we’re announcing that Evil Genius 2: World Domination will launch in the first half of 2021.

We had originally planned for Evil Genius 2 to launch this year. However, the impact of COVID-19, transitioning from the studio to our homes and adapting to new ways of working all contributed to this difficult decision.

We want to deliver a sequel that will do justice to the franchise and be loved and played by the Evil Genius community for years to come, just like the original. And while we know many of you will be disappointed to wait a little longer, launching next year affords us the time to do precisely that.

One of the things we most prize about Rebellion is our independence, which allows us the freedom to do what’s right for our games and our staff. That’s what we’re doing for Evil Genius 2. We hope you understand our decision.

We’ll announce a final release date as soon as we can. Expect an update sooner rather than later.

Here on the Development Blog, normal service will resume in two weeks’ time. We’re going to be to showing you much, much more of Evil Genius 2 over the coming months, as well as sharing some information on the upcoming closed beta. We can’t wait to see what you think.

Thank you as ever for your support and your trust. 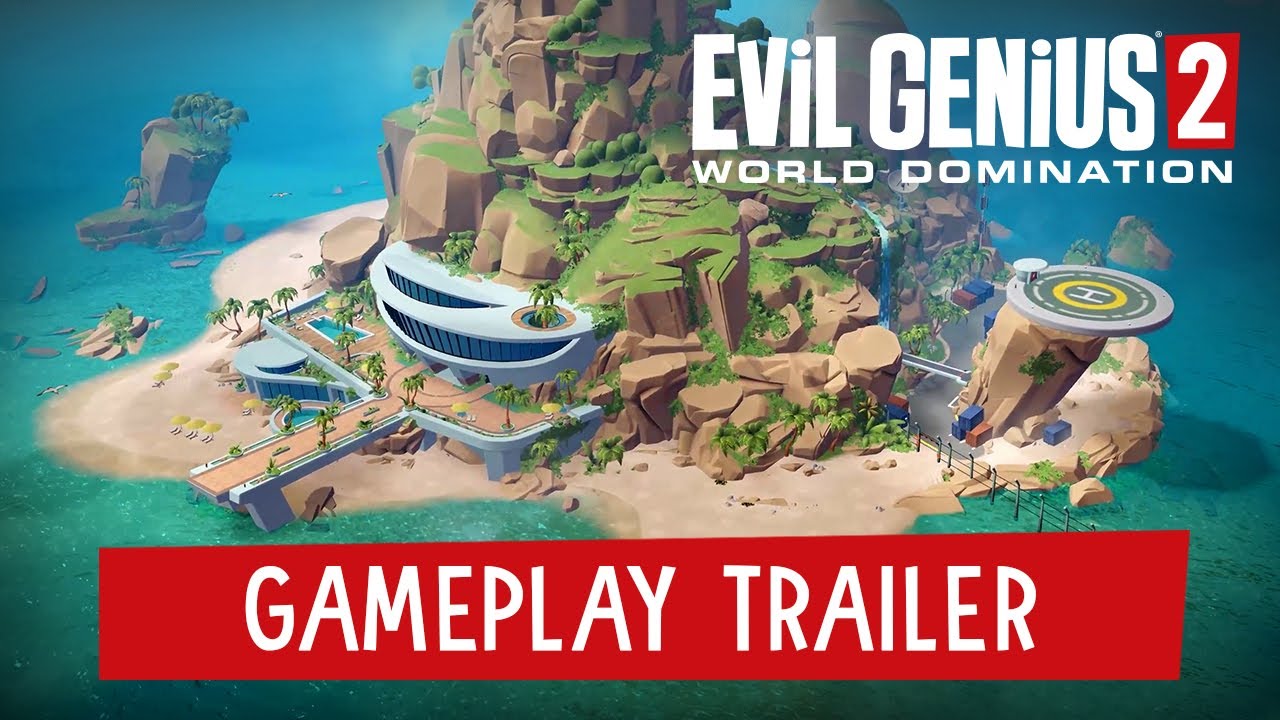 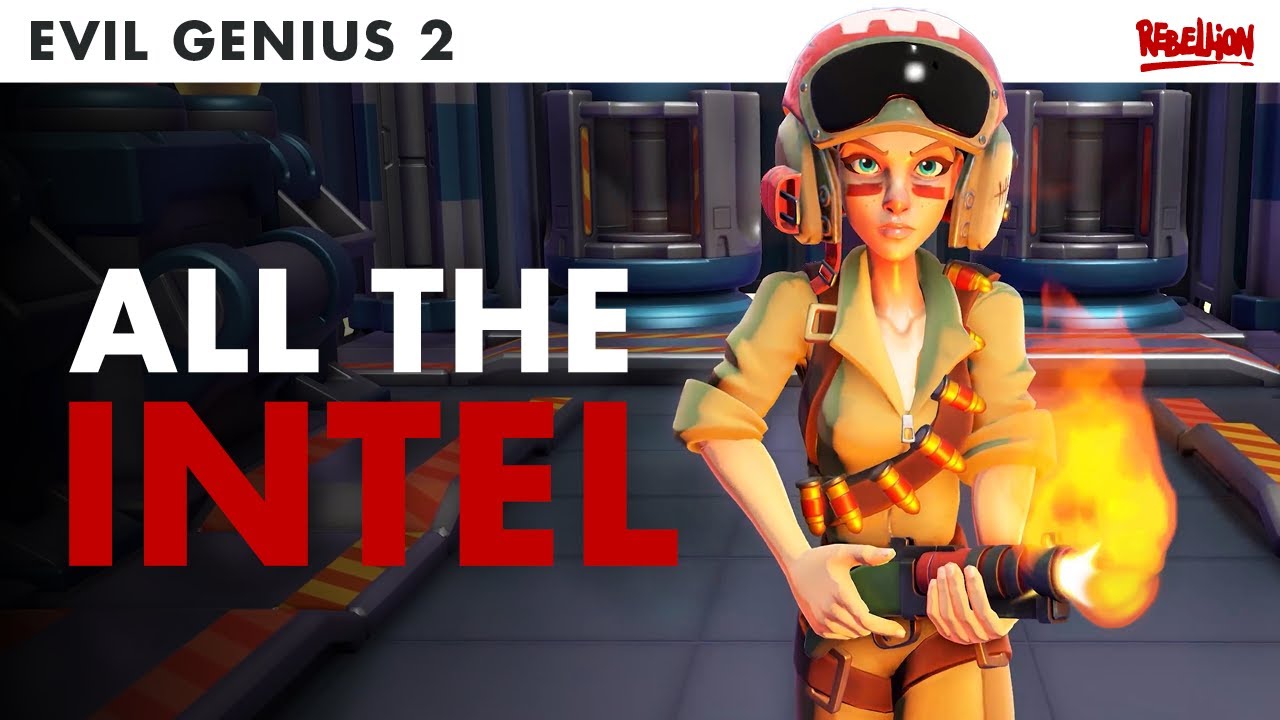 The game can presently be Wishlisted on Steam:

I’m super stoked for the game, and sad it’s been delayed. So far the videos shown has looked good, and as long as they keep in the same vein as the previous one it’ll be good. I liked the comedy of the first game, and glad they are going for the cartoon graphics style.

This almost makes me want to install the original again, but I know it will ruin my entire weekend and the next thing I know it’s Monday morning again.

I recently replayed the game, and it’s still lots and lots of fun. Needs some tweaking to get it working at a proper resolution, but still lots of fun. 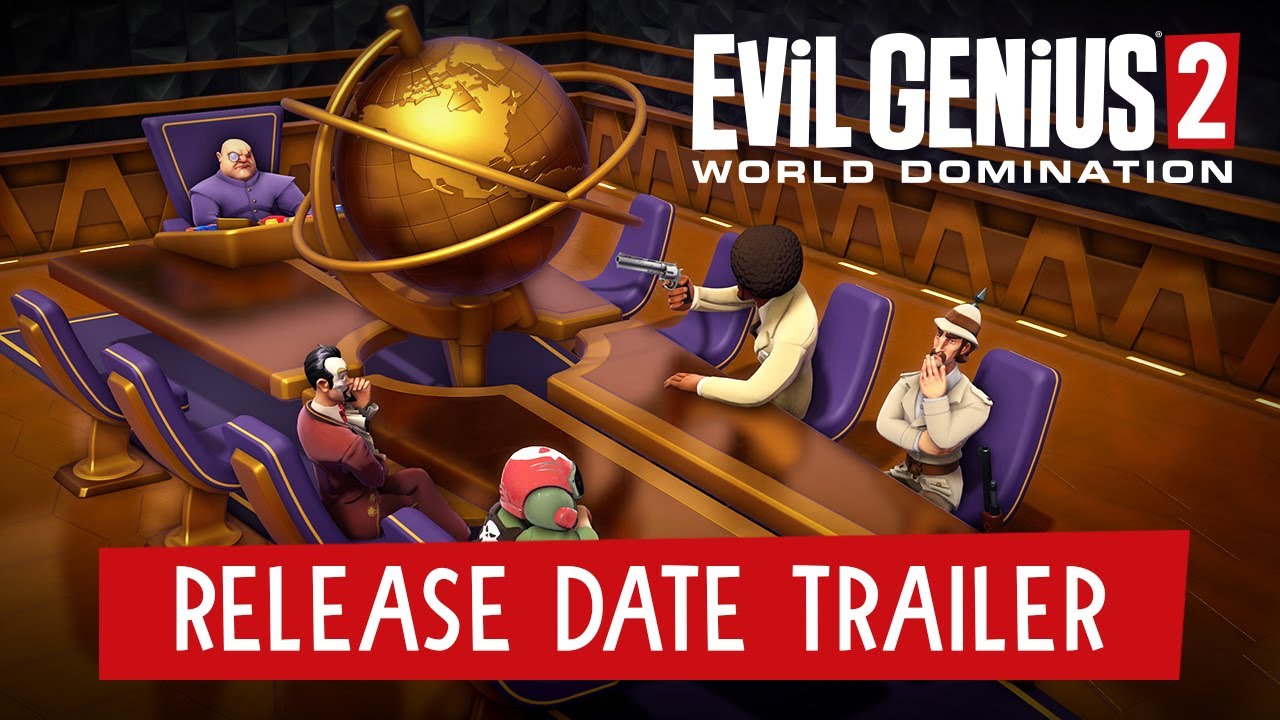 Here’s what all you budding supervillains can look forward to in Evil Genius 2 at launch:

Three island locations
Choose where to build your supervillain HQ from three island paradises, each with their own gameplay challenges. From the outside your base looks like a beautiful casino resort, but behind closed doors lies all manner of unimaginable evil.

Intuitive lair-building
Design, build and customize your lair as you see fit. With modern base-building mechanics and loads of gameplay features totally new to the series, including multiple-floored lairs, strategy fans will feel right at home with Evil Genius 2.

New rooms, henchmen, agents, traps and more
As showcased in today’s trailer, Evil Genius 2 features tons of menacing characters and devilish contraptions to use in your lair. From the deliciously fatal Sushi Chef to the always famished Venus Spy-Trap, you have a huge number of ways to stop the Forces of Justice from foiling your dastardly plans.

World domination 2.0
Take to the world stage and execute your campaign of total supremacy. Send your minions and henchmen on missions across the globe as you exert your influence and control over world regions. Complete lucrative schemes, expand your criminal network, recruit new henchmen and steal all manner of useful loot – from the Doors to Fort Knox to a living, breathing dodo. 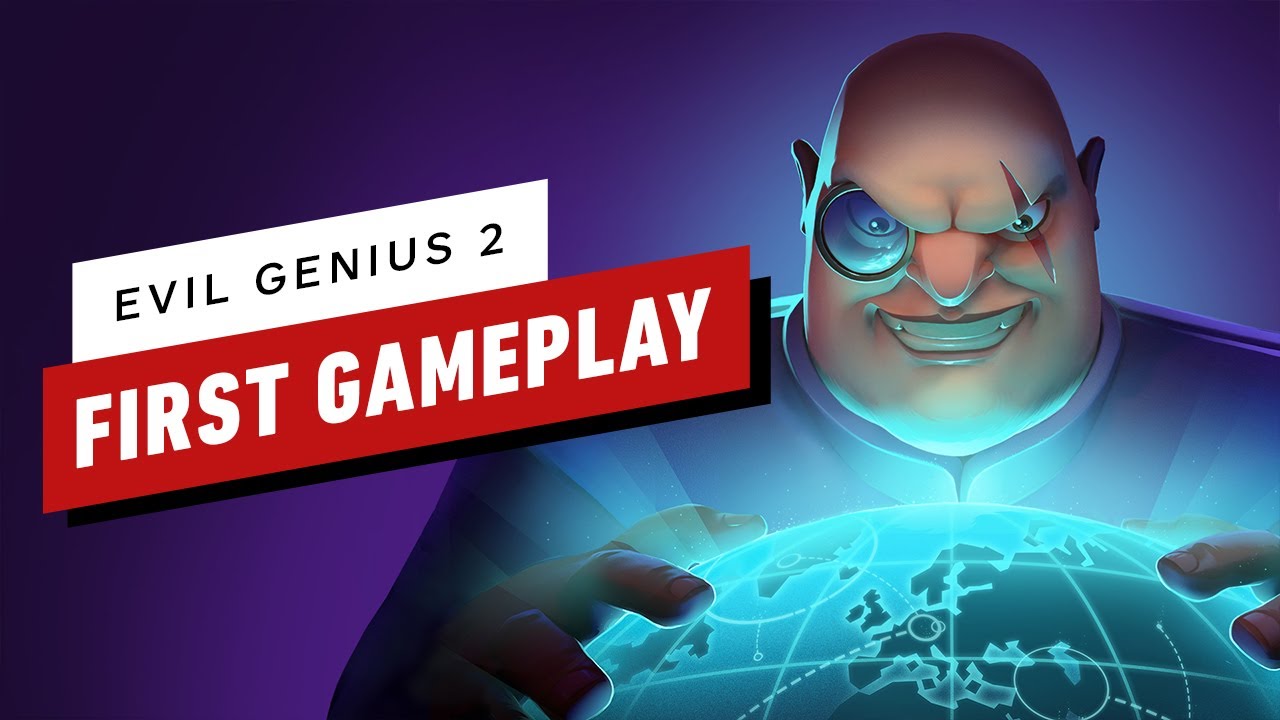 Pre-Purchase now available on Steam for Standard and Deluxe editions, both with 10% - 15% off discounts (10% for all pre-purchases, 15% for pre-purchases by owners of Evil Genius) until the release on 30 March. And that’s off of already very reasonable Regional Pricing for us in South Africa.

I better grab this in case they do a price adjustment. R186.15 is a great price.

I loved the original so much so hopefully this isn’t shit.

I better grab this in case they do a price adjustment

My first though too - missed out on some decent initial prices that got increased suddenly in the past (yeah, I’m looking at you Horizon Zero Dawn!)

Seven changes to be excited about: 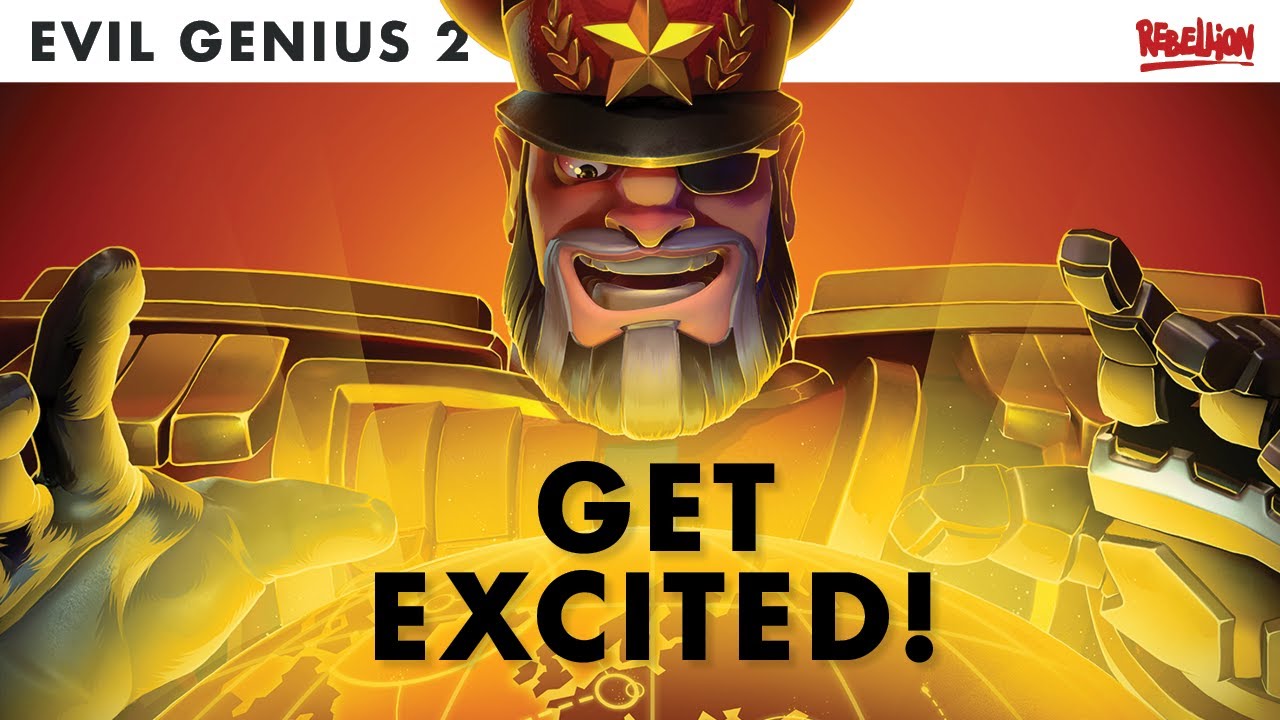 So I have the game in my library (Evil Genius 1) but I’m not seeing the discount when trying to get the new one.

It still shows as 15% off for me on the store page for the base game, but only 10% off now for the Deluxe? 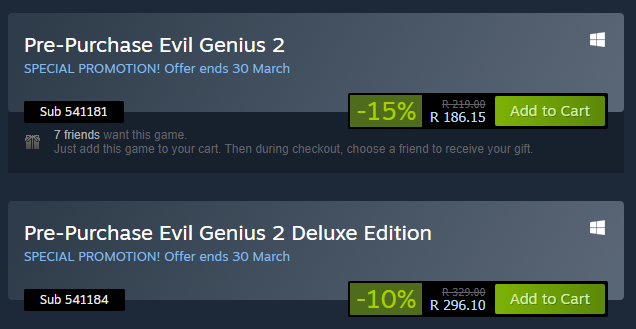 Maybe try adding it to a cart and see what price it gives you?