My father-in-law is an avid photographer. Hours are spent behind the lens each and every holiday. Heck, he’ll spend time in his garden taking photos of nothings.
After a bit of tweaking, the photos are showcased on an old laptop connected to an old flat screen tv in their living room.
The laptop broke a few weeks ago, and I was tasked to come up with a new idea.

My idea was to get a raspberry pi, and together with some photo viewer software, present a slideshow on the TV.

I bought the pi zero, without wireless, hdmi converter, and USB converter. I’m using an old Sony z5 mini charger, and my wireless keyboard. Don’t know where my wireless mouse is, so I’m without that.
I installed raspbian via Noobs and played around a bit. Realised installing other software won’t be easy without internet, then realised there’s no free port for a flash drive to show photos from.
I’ve got the option of getting a USB hub, but I’m not sure if there will be enough power going through the pi?
@murfle?

Generally, I personally only get powered USB hubs if/when I need them, where the hub gets plugged in to the wall socket. But for a keyboard/mouse, unpowered should be fine, and probably a flash drive as well. An external hard drive without its own power supply might be a problem though…

Does the pi zero not have a microSD slot, or is the memory onboard?

Great stuff.
It’s got an SD card slot, the OS is on there. Not sure if it’s a good idea to make a photo folder on the SD card to place photos in…
I’ll give an unpowered hub a try

There’s no reason not to put the files on the SD card. just do a proper shutdown of the O/S, put the card into a reader, and copy them over.

True, a flash drive would work a bit easier though. Depends on how often he updates the photos.

Let us try it like this first then. I’ll get his input as well. Thanks for the help

Just a FYI, be careful with Pi’s and using powered USB hubs you don’t want to backfeed power into the PI through its normal USB ports, you get hubs that will power everything except one port to connect the PI to, or you can make your own if you are willing to open a hub and cut some wires.

I can imagine this would be a problem with cheap hubs, but a hub should have a B port for connecting to the Pi, and A ports for your accessories. Hook the power supply up to a UPS to prevent surges from making its way into the hub, and there should be minimal risk.

I had a double whammy with laptops when leaving the UK so came back with my mother in laws potato.
That promptly died on me so I bought a pi4 4gb ram (just before 8gb was released).

Out the box I hated it. Bought it as a kit, so everything is original.
It took me 40mins of fiddling with the hdmi cableto get it to register on the TV as being there.
Had fun, switched off and same issue when I tried to use it. Called the supplier, wasn’t too happy with the answer so googled.

Apparently they sometimes have issues sending power down a HDMI cable to the screen.
Found somethings to edit in a root folder to boost the power.

Still having similar issues, but the trick is to not switch it off at all. Rather just let it stay on in sleep mode.

Now that is sort of works I love it.
Now to find some projects for it.

when leaving the UK

Wait what? You’re back in ZA?

Ye, need to change over to a spousal visa. Was supposed to be 2/3months max but rona had other plans for us

I installed an instance of NextCloud pi version, but I decided to just install it on a spare desktop instead…

Do all the Pi 4s have this power supply to HDMI problem?

Don’t think so. My tv is also old and a PC screen apparently works better

I have a few Pi 3s did not see the point of getting the new pi 4 any time soon. But I have run a few things on the Pi 3s never had a issue like your with regards to power and HDMI…

Projects i have on my Pi 2 is Retro pi

Retro-gaming on the Raspberry Pi

Quite easy to setup, i did have a issue with getting a few roms but its been working great so far.

Other project i have is running a Pi 3 with a small monitor at a Lapa, thats connected to the network. I then have a small website that takes a screen shot of the cameras around the house, this then gets refreshed every 5 seconds. Nice thing with this is i can see whats going on at the front gate and If im not at home i can access the site as well.

3rd Project I have is running Pi Hole

I do how ever want to find a better way of running this on the home network.

Pi Hole’s are great. What would you like to improve?

Gotcha. It runs well in docker, if that appeals to you for another machine.

Looks like there’s a vulkun driver for the pi4 coming along well
https://www.phoronix.com/scan.php?page=news_item&px=Raspberry-Pi-4-V3DV-Usable

I know nothing about this stuff, but there might be something in here for those that do: 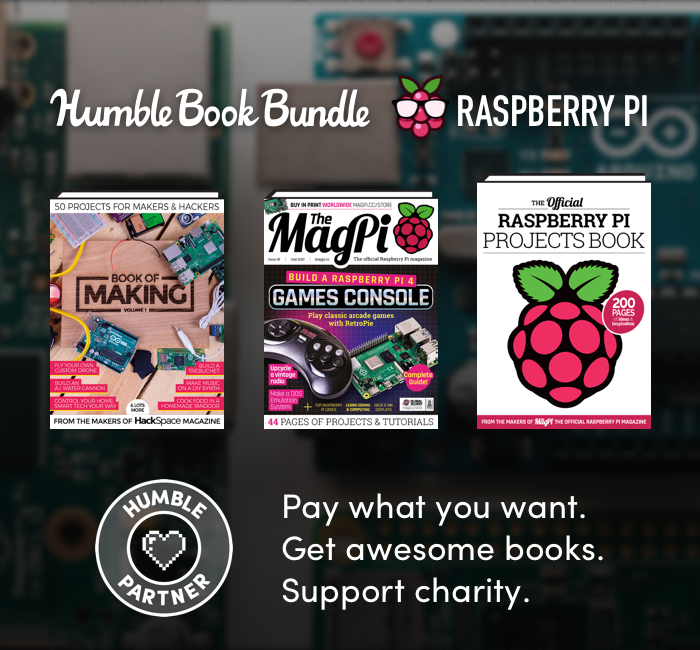 Let others know if there is any value in this.

I’m highly considering this… I’m also looking at magpi.cc/store to see about a subscription. It comes with a Pi Zero too.

Thing is, would I actually read them, or try implementing any of them? Also, how many of these projects can’t be found on instructables.com or whatnot…

Still, a donation going to the Pi foundation would be worth it… At least the offer is good for another 20 days, so I can think about it.