No Man's Sky — Every Atom Procedural 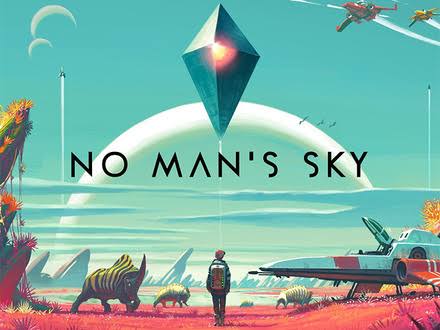 So I finally did it. I couldn’t not with it at that price. I’ve been intrigued by it since it’s launch but with all the hate it got I stayed back a bit and only watched a couple of gameplay videos. It’s been on my wishlist for a while but I finally decided to get it. 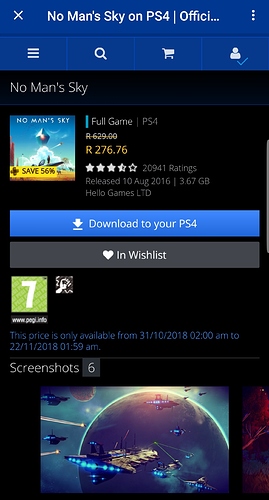 Thought I’d make a dedicated thread for it. I’ll try post gameplay and screens when I can. I don’t think it compares to the Star Citizen graphics we’ve seen from @Sweepslag but I’m sure it might still be fun. For a bit at least.

Go for it. I look forward to hearing your insights!

I played it recently when they launched the big version 1.5 update.

I found it to be quite enjoyable. I built up a big base and did some item farming for cash to upgrade my ships and build up a frigate fleet, who would go do missions while I ran around planets looking for those word stones and buried treasure to buy base component blueprints.

I would recommend it. Especially at that price

It still doesn’t have multiplayer right?

I think it does

I actually really enjoyed the game. Granted, I only jumped in right before the Next update and then again after it, but my time in the game was really enjoyable. Sadly, Destiny 2 is taking up all my gaming time, so any other games have gone by the way side for now…

It does have multiplayer as of the last update.

With each new improvement they’ve made I’m closer to getting this game. It looks really good now.

There’s an underwater update coming soon, which brings Subnautica elements to the game, including submarines and underwater base building. The scale in this game is absolutely staggering by this point. I’m anxiously awaiting a larger player base klapping together and building a metropolis in the game!

Edit: The Abyss is already out apparently. Another big update is coming adding more diverse fauna and flora, as well as archeology and artifacts!

So played for a bit tonight. Was totally lost at the start. Died once because my suit wasn’t charged. Eventually found out how to do that. Then there were more things to confuse me.

So far the game is good, but I’m not far at all. Repaired my ship and now have to use the terraform gun thing to get copper. I think to build a base, not sure.

Didn’t know I couldn’t mine with those sentinel things watching. That didn’t end well. Had to flee in my ship. Then I also had some run ins with some local creatures wanting a piece of me for some reason. I didn’t even do anything to them

Video of my first play, the one where I died by burning alive in my suit

Found a planet that was mostly water…

and one that had a nice beach and blue waters…

Just carrying on still finding my way around with everything. Found a space station and the interesting creatures there. Trying to get my head around the whole blueprint thing at the moment.

For those that have played a bit more, does it ever get easier to gather resources? Can you eventually automate it or something?

You upgrade your multitool with a variety of upgrades that gives you more yield and with longer use before overheating. Even at max though it does take time to burn through Iron/carbon deposits. The things you were gathering in the video are pretty quick.

You can construct an autominer but they only work on the things you can mine using the terrain deformer, not the stuff you can get with the multitool and they take forever. Those are more a leave behind and come back in a few hours kind of thing.

Gathering is a large part of the game and you never stop since you keep having to power everything you use with resources.

I found that once when I had my farm operating (side note: took quite a while) and generating cash, life was much simpler buying the basic resources instead of running around harvesting to stay alive

So the update is done. Haven’t noticed anything new yet although the game does seem smoother.

So I got a message from some guy to come help defend his Frigate, did that and then went to meet him. Next thing he gives me the Frigate. Now I have this giant ship I don’t know what to do with.

I just left it there for now. My mission I’m trying to do is get some guy to manage my computer terminal thing. So I’m looking around on space stations to hire someone.

There was also one part where it asked me if I wanted to continue following the clues and encrypted messages and stuff or if I wanted to do some free roaming. I chose the free roaming but I hope I can get back to the cryptic messages again later. But for now it’s actually good that I can free roam as I set up base properly now and not ‘living off the land’ chasing those cryptic clues.

Edit:
Oh! I remember seeing that you can build submersible rooms. I think that’s part of the update. Now I need to find that water planet again…

Ok so I’ve been playing this for a couple of days now, I’m finding that I’m getting a bit tired of gathering stuff over and over again. I think I’m going to take a break from it for a bit, not uninstall, just a break.

Bringing back the topic