So apparently these two monitors at Checkers

are causing a bit of a stir in the South African gaming scene: 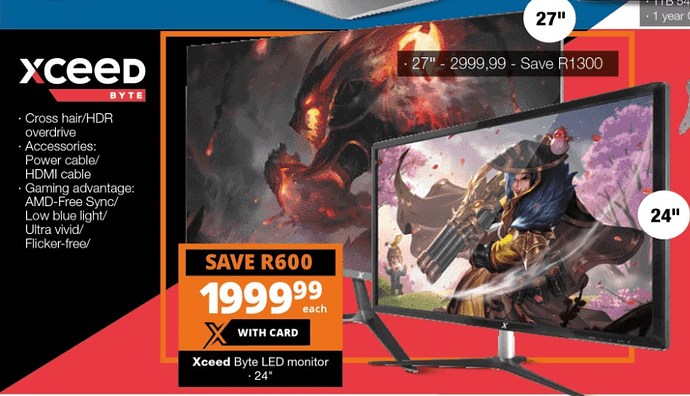 Despite them being a no name rebrand for Checkers - it turns out they have pretty decent panels, 144Hz Freesync (G-sync compatible with DP cable) kind of decent.

The Carbies are also going crazy for the monitors as they are such a good deal.

https://specials.checkers.co.za/deals/hocheckerstechxspecials01may07june/index.html On the specials they list gaming monitor with freesync and HDR. Anybody bought one yet ?

There are some concessions - the HDR isn’t really proper HDR and the colours do need a bit of calibration, the stand is not great either. But aside from that, anyone looking for a cheap but decent high refresh screen should get themselves down to Checkers (You need to register for their X-Savings card to get the deal) - This is not a sentence one would expect to be saying!

If I had the spare cash I’d definitely get one of the 27" monitors to replace my current 75HZ 27" - would love to have the high refresh rate in games.

Wow! If it was not for this flipping Corona thing I would have looked at getting 3 for my triple monitor rig

There’s been a few who have done exactly that.

I see there is a thread on mybb as well.

It’s very interesting. I see some people love them but I saw one guy at Carbonite who didn’t like his monitor because of ghosting.

My wife’s monitor has a vertical stripe on the right of the screen. I wonder if I should maybe get one of these to replace it.

For a sim rig that requires 3 monitors this is ideal! @oltman I see you mention that if it wasn’t for the Corona thing then you would have gotten it… Why is the virus stopping you?

Because i had no income for 2 months

EDIT: Sorry, to elaborate, I got paid a salary. But my company had no income. So I am scared to spend before I build up some savings again.

Aw sorry to hear that @oltman. I hope your company starts making an income again soon.

Hahaha, my wife is awesome