Automobilista 2 is a racing sim that seems to be gaining traction (badum tish) in the sim racing community since its 1.0 release.

Automobilista 2 is the culmination of a project developed over the course of nearly a decade. At its core, it is a comprehensive simulation of the brazilian motorsports scene, featuring all major brazilian racing series, race tracks and manufacturers.

Packing an even larger roster of diverse cars and tracks than its predecessor, Automobilista 2 ventures further into the best of international motorsports, including prestigious brands along with iconic venues such as Brands Hatch, Mount Panorama and Imola, at the same time continuing to explore the more exotic and exciting forms of motorsports from around the world.

Boosted by a new technical partnership with the developers of the award-winning Project CARS series, Automobilista 2 is built on the MADNESS engine, providing incredible graphical quality, the most advanced dynamic weather and track condition systems in a racing simulator and superior VR support, to deliver a substantial realism upgrade over its precedecessor and a fully immersive visual experience.

The game has a long-term development plan that will see continual developments being made over several years following its release, with the addition of new game modes, features, cars and tracks from the best of the past, present and future of motorsports!

The game has been praised for its tyre modelling and force feedback as well as its VR support.

I’ve just recently purchased the game so I’ll have more to share from my personal experience soon. 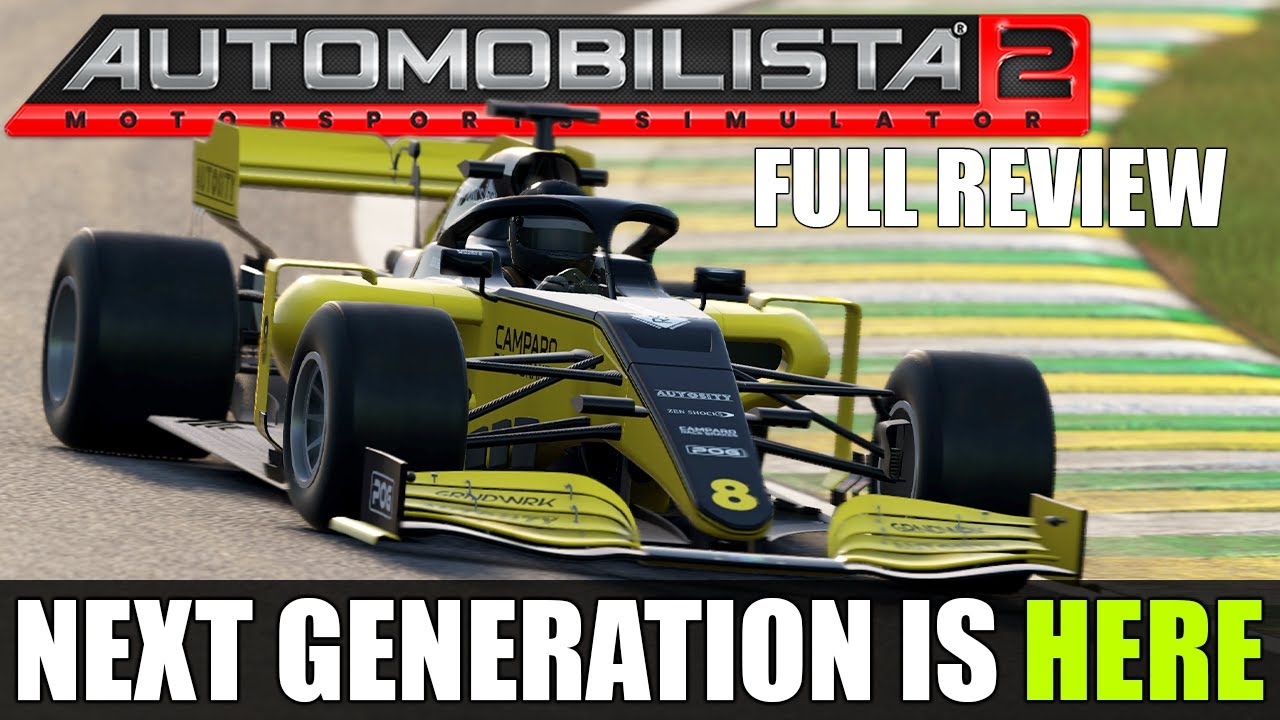 From some reading in the past, feels like AM and AM2 has somewhat of a cultish following, touting tyre model as the most important thing that us niche, but bigger niche of AC drivers should care more about. Except content is kind of important too… and they seem like an even smaller studio, which amounts to higher quality content, released at a snails pace. There’s also some grumbles about things they take a long time to address. Again, probably just a natural outcome of having a small team.

That all said, seems like it’s worth the money. I mean, how many quality games do us simracers get to choose from? You can probably count it on one hand.

Uhm, this game is amazing. If you can find a car you like to drive, which admittedly is difficult, with so little official cars. But man, the driving experience is next level. Caterham’s are fun to fling around a track. So many open wheels cars on offer. Even took an Aussie V8 for a spin around Bathurst, in the words of Gordon Ramsay, Fuck meh

Best part, the VR performance is stellar! No frame drops, and i didn’t even touch the graphics settings

Haven’t bought any DLC yet, but i’ll make a plan this week

I’ve only spent an hour flinging cars around in VR and already these are the things I love about this sim:

Only negative I can think of is that the sound could use a bit of work in some cars, I’ve only tried a handful.

We are capping our “Open Wheel Month” with a bang: the beautiful Mclaren MP4/12 from 1997 is another officially licensed car being added to Automobilista 2´s growing roster of classic Grand Prix cars - free for all AMS2 owners!

This car is very special for a few reasons besides its distinct visual and being the first of a long series of silver Mclaren-Mercedes - it was the car that ended Mclaren´s victory drought since the departure of Ayrton Senna in 1993, and earned Mika Hakkinen´s first win in the season finale after a series of DNFs from the lead.

The car had one other thing that made it special… The ingenious “brake steer” system.

What it is: The “fiddle brake”, or “brake steer” system was developed by Mclaren originally for the MP4/12 in the middle of the 1997 season, with the addition of an extra brake pedal allowing the drivers to control the inside rear brakes (left or right depending on how it was set up in the garage) independently from the main brake system - the theory behind it being that in a car limited by front-end grip, activating the inside rear brakes could help “tip” the car into corners, and also to aid traction.

Mclaren gained competitiveness in the latter part of 1997 thanks in part to the ingenious new system, earning two wins in the second half of the season, including Mika Hakkinen´s maiden win at the season finale (after retiring from the lead no less than three times). The device remained in the car for 1998 but was soon banned as Mclaren begun to dominate the series A more in-depth reading on the system and its development can be found here.

How it works in-game: You activate the system by using the handbrake command in the game (now called “extra brake” due to its multiple purposes depending on the car - it remains a simple handbrake for vehicles that have one). To get the best of the system you´d ideally want to map it to an analogue control, replacing the clutch pedal if you´re looking for extra accuracy as it allows you to modulate the pressure and thus how much 'fiddle braking" is actually being applied.

The mechanics of the system works just as it did with real life, with one exception - in the real car the team would have the option to set the system up either on the right side (typically for clockwise circuits with a majority of right-hand corners) or the left side for anti-clockwise circuits. In the game this switch is done automatically according to the direction of the track, there is no setup control over it.

How to drive with it: The system is worth a few tenths potentially depending on the track, but it demands a lot of feet coordination to get the best of it. The best approach is try to find your pace with the car on any given track driving “normally” for a few laps, and then see how you can use the brake steer system to help flick the car and control traction out of slow corners!

Well I picked up the game so I’ll install and give it a go, see what’s what.

I think we have enough people now for a casual race some time.

Very cool mention, in my opinion!

Hello everyone! Happy to bring you all another round of our traditional monthly development catch-up. The month of August has been buzzing with racing again as most series push to catch up with the time lost during the early months of the year due to...

I joined the MNR guys for the last mini race they did last night. We took the Formula 3 (F309’s) around Interlagos. Man it was fun driving that car. I finally experienced the quality of force feedback that many have been raving about. When the car started sliding round corners I was able to intuitively save it with a quick counter steer.

The start was quite hectic and it was difficult to tell when someone was near you, except by hearing them, something like Helicorsa would be a huge help. I’d also forgotten to start up Crew Chief. In VR you could at least turn your head to look in the mirrors so after the race I tried out using the Smoothtrack app with Opentrack. To get it to work I had to launch the game in Steam VR mode which doesn’t change anything graphically, it just enables the head tracking, and I can say that it works fantastically with the default Opentrack setup!

The new update adds several Classic cars, brings the popular Mini Challenge JCW as it is in the top class of the UK Mini series, two Kart circuits, along the usual package of new features, fixes & improvements. One of these features is the...

During Lockdown I went through a bit of a spending spree for racing sims. This, rFactor 2 and F1 2020 has seen less than an hour each. I really want to play it more, but my problem is that I am enjoying ACC so much.

How sucky that we have so much choice!

I know the feeling. The good news is that by the time you get to playing AMS2 it’ll be polished up really nice into a great sim.

Every time I play AMS2, it leaves me smiling.
Try a V10 F1 around Montreal or Interlagos for example and turn the sound waaaay up. Pure simulation bliss.

Major update released yesterday. new cars (GT3 and GT4) and Nurburgring included. Biggest improvement on the FFB apparently. I have not had time to play with it, but I am keen to see hot the GT3’s compare to ACC!

Automobilista 2 V1.0.5.0 is now available, featuring the much awaited GT3 / GT4 car pack and the Nurburgring Circuit. Release Promo - Temporary free access to the Nurburgring track! With the Nordschleife and 24h layouts not quite ready for this...