Game Club is like a book club for games. We get together and play a game during over a set period, from the start to the finish. Sometimes there are awards that get displayed on your profile. We also chat in the evenings while we play and it’s a lot of fun. Buy it, play it, join our chats in the evenings, be happy and content with the world.

From 13 December 2019 to 31 March 2020, we will be playing The Witcher 3: Wild Hunt. (Folks with Netflix will also probably watch the new Witcher series launching on 20 December.) 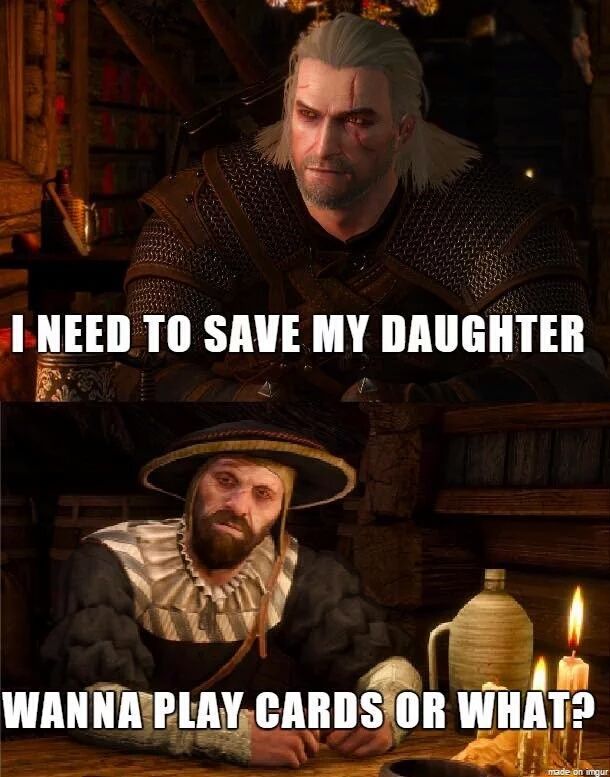 Voting happened in the previous version of this post, embedded below.

Since people got really busy over September, October and November, there hasn’t been a full GameClub in awhile.

I have a proposition: With The Witcher TV series coming out on 20 December, let’s all play The Witcher 3 together. We can start this weekend and give everyone until the end of February 2020 to finish the game.

It is a very long game if you take the time to really play it, so I want to give folks more than enough time to play it at a leisurely pace. Maybe we should even give folks until the end of March 2020, then we can play the DLCs and everything too?

Discourse lets me create bronze, silver, and gold versions of an award, so we could even make it that finishing The Witcher will give you a bronze award, if you also finish one DLC you get silver, and if you finish both DLCs you get gold?

Or we can make the DLCs a separate award — silver for one and gold for both? That way the main Witcher 3 gold GameClub award isn’t gated behind having to buy two DLCs.

I’ll create some polls — let me know what you think. I’ll create polls for how you think the awards should work once we’ve had some time to discuss it.

For those who don’t know: Game Club is like a book club for games. We get together and play a game during a specific time period. From the start to the finish. Sometimes there are awards that gets displayed on your profile.

We also chat in the evenings while we play and it’s a lot of fun. Buy it, play it, join our chats in the evenings, be happy and content with the world. The chats are optional though as long as you post in the Game Club threads.

It used to be called MyGame over at MyGaming where we have played 11 of these.

Poll: Should we play The Witcher 3 for GameClub 11?

Poll: If we start on Friday evening, how much time should we have to finish The Witcher 3 for GameClub 11?

I love it! Great idea @SIGSTART!

I know that @MalicE is in.

If the superfluous third act is skipped and you stop playing the game where is was originally meant to end, then it will be a great idea. But if you choose to continue on, playing the content that CDPR added in order to meet their arbitrary 100+ hour target, then it becomes a far less enjoyable endeavour.

@Hiro I agree with you on a lot of things but this isn’t one of them.

I’m definitely in. Will probably play on PC so I can use mods.

The expansions are a must. Hearts of Stone is really good but Blood and Wine is the gold standard for an expansion. It can put a lot of full games to shame in terms of both the amount and quality of content.

I still need to finish my original playthrough of the game so I’m keen to participate but I won’t restart, I don’t mind not being eligible for the awards.

Being the silly bunny that I am, I forgot to tag folks in the OP.

Did I miss anyone who previously indicated interest in playing The Witcher 3 (or a game like it) over December for GameClub?

Something else I just thought of: I think The Witcher 3 has a New Game+ mode. I’m on the fence about whether my playthrough should be New Game+, or completely vanilla. Opinions?

If you’ve already finished the game NG+ can be a good time. You will get a lot more skill points to spend to make your build stronger and you can up the difficulty as well if you want.

All your gear that you’ve worked on and might have spent a lot of gold on will be pretty much useless though. You’ll have to start making Mastercrafted gear from scratch.

Alchemy build based on multiple decoctions is really strong and fun to play (except when the game takes them away after a cutscene sometimes) in NG+.

I have always wanted to do an NG+, but didn’t want to invest the time in another playthrough up until now, so I’ll vote yes to NG+

Quick, work in Witcher 2 before you start the 3rd game.

(You haven’t played it yet as far as I remember).
It wasn’t a bad game (not as good as the 3rd one though) and you can easily finish it over a weekend. Some story elements will also make more sense in Witcher 3 having the 2nd one as background.

Anyway, I’m in, but I’ll only start in January. Microsoft changed the way we qualify for partnership (without notice) so now I have to prepare for an exam or risk losing our Partnership benefits.

Haha nah I’ll give Witcher 2 a skip. There just isn’t enough time. Will see if I can find a recap of the the first two games online.

you can easily finish it over a weekend.

If we make it for March 2020 and I buy it on the Christmas sale I might make it.

Ok, maybe not easily, but I’m sure I’ve done it before. Maybe 2 weekends at most.

Just a reminder for Xbone guys who don’t own the game yet and wanna join. The base game is coming to Game Pass (console only) the 19th (December).

R220 for the GotY Edition is fantastic pricing.