iRacing - The Ultimate in Sim Racing

@DieGrootHammer and I were talking a bit about it. @oltman and @GregRedd would you guys ever be interested in throwing your money into an endless pit of well serious sim racing?

iRacing is the leading online racing simulation. In the fast-paced world of eSports,  iRacing is a one-stop shop for simracing.

I took the leap! This was the push I needed, and now I’ve got a 1 month sub to iRacing. Will see how it goes this month and see whether or not I’ll continue with it. Will try it out tonight I hope.

What? Wait, no! I’m not here this month. But then you can tell me after the month what you think of it. It will be very interesting to hear.

Yeah don’t worry. I want to try it out and see if it is something I am going to get into or not. With this thread and our discussion earlier, I just thought I am going to just do it.

would you guys ever be interested in throwing your money into an endless pit of well serious sim racing?

I’ve managed to avoid the endless pit for many years, although I’ve always like the premise of iRacing. I can’t even manage to find the time to do a random Weekly event in a silly F1 game. And as much as I love motor sport in general, in this case, I’ll be right there with you guys in spirit and spectator mode, ready to wave the flag

If you do sign up, you’ll be in good company…

Max, Lando and SA’s own Kelvin vd Linde were iRacing until the early hours again. And that after a full GP. 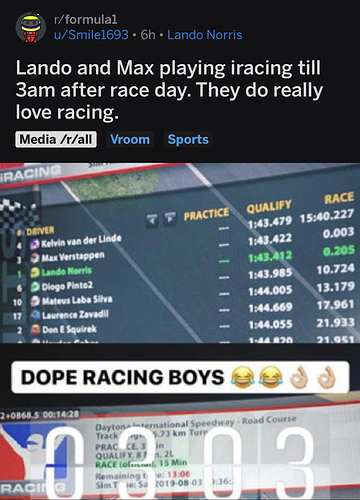 Haha it’s that exact post that made me have a good proper look at iRacing earlier today. It sparked all of this.

Its why I love the kids in F1 these days, they are making waves and attracting more people to the show.

Right, so I had my first ever race last night in iRacing, and what an experience! I did the Mazda MX5 Cup, which is one of the most populated rookie series. Spent about an hour driving the track in practice mode to get a feel for the game and the driving model, which is so satisfying. Jumped into a lobby, got through practice and qualified in 3rd place for the race. I felt very chuffed with myself for that performance, as I was just 0.3 seconds behind the pole position.

The race was like nothing I’ve seen in multiplayer yet. It’s racing against people that actually know how racing works and how to give people space on track. I was so flustered and stressed on lap one that I lost a position, but made up two in the next 2 laps. I found myself in second place for a few laps, holding my own against the leader. I got so nervous that I started making a bunch of mistakes and got overtaken for 3rd. Few laps later I got my composure back and started driving the correct line again. That’s when the two at the front took each other out. I seized my chance and took the lead of the race, only to be caught out by the guy that was following me close behind. After another few laps I caught up to him, and had a blinder of a third last corner to get on his inside. I passed in what I thought was a fair manner at the next full speed corner, but the game thought I cut the corner and had to give the position back. That put me in second place again and I followed the leader until the end. At the line I was 0.2 seconds behind him, right on his gearbox. But I managed to finish the race in second place.

If that was the first impressions of the game, then I foresee A LOT of time I’m going to spend in iRacing.

Thats great! I know the iRacing system seriously frowns upon “gamers” playing their game. This is a simulation, and only racers need apply. And by that I am not implying skill level, but rather attitude and behavior.

I was wondering about the connection. Was there no sign of lag or other internet issues? Does it show you where everyone else is from and their connection speeds? Is the game peer-to-peer or server based? And where are those servers?

Sorry, my biggest gripe with online gaming is lag. Shooters obviously should suffer more than racing games, but Forza and Project Cars and even F1 have some terrible rubber banding effects due to bad connections. That could ruin these games for me…

About the mechanics of the multiplayer, I am not sure how the servers are configured or where they are located, but I had absolutely no issue with lag at all. The netcode is seriously impressive. I had multiple wheel-to-wheel moments in the race and…

…and it felt like racing against AI drivers. I was able to keep right next to other cars with no impact from latency or lag at all. It was really interesting.
(sorry, my full comment didn’t save and I just reloaded the page and submitted the comment without reading it.)

and what? Don’t keep us in suspense!

…and he lost connection, clearly.

I really like the idea of iRacing. Especially seeing Hammer enjoying it so much. But I’m still such an amateur at the whole sim racing thing so I’m just not ready for iRacing yet.

My plan is as follows:

If I can’t get top 3000 time trial scores then I’ll rather move to other games like Project Cars 2 and learn to be a better driver over time.

I am in exactly the same boat - wanting to race against more drivers of a similar skill level, improving and progressing as I go further. I did some research into this topic a few weeks ago and came across a local Sim Racing group.

Sim Race South Africa is the home of the Protea Sim Sports, where our national team gets selected from. They seem to have a pretty good following and regular races for drivers of all skill levels.

So, you have come across the Sim Race SA website with the hopes of joining other new sim racers with similar skill levels….. Is it all looking a little too intimidating? What with all the rac…

Their beginner league / qualification for 2020 starts at the end of August:

Introduction to the Road to Season 2020.1 Series

The Road to Season 2020.1 Series is designed to offer a starting point for new sim racers to develop themselves using forgiving cars in a close racing enviroment. As the season progresses faster ca…

They race with Assetto Corsa which can be had for pretty cheap on Steam. I got it on sale recently and it has a great following online and loads of track and car mods. Might also be worth looking into. #justSaying