Recent chat over in the Dirt Rally League thread prompted me to go investigate DR2.0 leagues to see how complicated it was to set up/how different to leagues in Dirt Rally. Turns out, its same same only different.

There are a two differences though that either aren’t in Dirt Rally leagues, or weren’t there when I last created a DR league years ago.

Firstly, your Club can be set as a Cross Platform Club allowing PC, Xbox and PlayStation drivers to take part in the Clubs Events and Championships. I’m not sure how many MEWbs that will affect though. I have 7 folk on my Steam Friends list that own the game, and another 5 that have it wishlisted. Are there any XB or PS Dirt Rally 2.0 drivers out there?

Also, I cannot work out how to switch the rally locations from one to another during an event as @PsychoFish did for us in the Dirt Rally events. I can only seemingly pick one location for an Event, and all the Stages are for the same location. So no Monaco -> Greece -> Wales -> Finland -> Germany style events. At least that I can find.

Also can’t find a “Checkpoint” option, or “Stage Restart” or “Event Retry” options so I’m not sure if that means you have to complete all the stages in an event in one go, or if the new version allows you to save between stages. There is still a “Service Area” option for each stage, but rather than a Yes/No option it now has Short/Medium/Long/None choices. And there’s also a new setting for “Surface Deg” which I have zero idea how it affects the stage.

The system will auto-generate a route for you based on the location and number of stages you choose, but all the options can be changed manually.

In @PsychoFish’s absence - I’m guessing he’s well busy at work at the moment (when are you going to be able to tell us what your company is working on anyway?) - I’ve gone ahead and created a new Club and set up a single event Championship for us to use to test things out on.

The Club is here: https://dirtrally2.com/clubs/club/245127 or search clubs for “MEW Dirt 2 Club”. I assume somewhere on the main page is a “Join” or “Request to Join” button that anyone who wants in can use. I’ll try accept everyone as quickly as possible, but let me know here that you have asked to join to light a little fire under me.

I’ve also sent invites to the 2/3 guys who started this thought over in the Dirt Rally thread and a couple of others who have the game and are in my RaceNet Friends list. Join up, run the test championship event and let’s see if we can get this to work.

Hmm, I think I have a Dirt Rally 2.0 key lying about somewhere in humble.

It’s quite possible - it was one of the games in the Humble Choice selection in Dec/Jan. I remember doing a giveaway for my key here. Think it was @oltman who won it? It’s worth installing, especially if you enjoyed the original Dirt Rally stuff - better engine and improved graphics. Only downside is the tons of DLC that have been released post-launch, but the base game is pretty well stocked content-wise, to be fair.

If you (or anyone else with the base game!) is thinking about picking up some of the games’ DLC DON’T be tempted to buy individual cars/tracks! Even if you just want one or two items. Doing it that way you’ll pay R18 for a car, R36 for a rally location/rallycross track. In total, you could land up spending R1000+ for all the DLC.

The better, significantly more affordable way to do it, is to pick up the Deluxe 2.0 Season Pass (which gets you Seasons 3 and 4 content) for R89. Or toss in the cost of another burger and fries and get the Year One Pass (which has all the Season 1/2/3/4 content) for R130.

(Scroll down a little on that Store Page for the Year One Pass deal.)

Also just remembered that the game is currently also available on Game Pass for both Console and PC, so if that’s you get your download on!

DiRT Rally 2.0 dares you to carve your way through a selection of iconic rally locations from across the globe, in the most powerful off-road vehicles ever made, knowing that the smallest mistake could end your stage.

Think it was @oltman who won it?

Indeed! I am a weener!

I’ve joined 2 other DR2 leagues before this and I’ve not seen the restart option available on either. Sample size of 2, so ya.

There is still a “Service Area” option for each stage, but rather than a Yes/No option it now has Short/Medium/Long/None choices.

You set the first one 3 stages in, I broke all my lights and the 3rd was a night stage

And there’s also a new setting for “Surface Deg” which I have zero idea how it affects the stage.

It simulates the deterioration of loose surfaces, so “high” means that hundreds of cars have torn up the surface you are about to drive on.

I’ve not seen the restart option available on either.

Hmmm. Are you still able to save after completing each stage? Or did you have to run through the whole event?

You set the first one 3 stages in, I broke all my lights and the 3rd was a night stage

It simulates the deterioration of loose surfaces

Ah. That actually sounds like a damn good feature. Could run the same stage twice in the same event and increase the surface deg from the first run to the second.

All in all, sounds like with a little tweaking we could get this to work for us. Thanks for guinea pigging things!

I’ll play some when i get home, give some feedback

Still looking for more Dirt Rally 2.0 test run participants! Don’t be shy or scared. The Dirt Rally Leaderboard is a zero bullying safe space with no judgement on any driver’s skills, promise.

This is the only MEW Racing League series that does not depend on having everyone online at the same time, and is not impacted by weird power or ISP issues.

If you’re not keen on committing to buying the game outright on Steam, remember that Game Pass subscribers have either (or both!) Windows and Xbox versions available to them. And the Club is cross-platform enabled so console players on Xbox or Playstation can get involved too.

And come get dirty with us!

Disclaimer: I retired before starting the 3rd stage. Driving through a forest in the dark in VR? yeah, nah.

I must get to installing this so I can join the league. I moved the original Dirt Rally from the SSD to make some space for it. It’s a fairly large game!

That’s a good point, and one I should have mentioned earlier. The PC install is close on 100GB at the moment. The main reason is because all the DLC is downloaded whether you actually own it or not. There’s was a Dev post last year explaining why this happens.

Give me a second to go find it…

Yeah, 110gb for me… I had to uninstall Borderlands 3 to make some space as well. I bought but am yet to play it. Rally wins!

I also don’t have much time to play at the moment.

don’t have much time to play at the moment

Yeah, got that feeling. No worries, we’ll keep your Dirt League on hiatus until your schedule clears a bit, and just mess around with D2 in the interim.
I don’t think nearly as many have D2.0 compared to DR either, so no stress. I’ll keep watching for special deals and discounts on it, and we’ll do a mini league for those that want to.

Gentle reminder that our Dirt Rally 2.0 Test event is still open for another 5 days. Would love a couple more to try a run through the picturesque backroads of New England.

Again, the Club is cross-platform enabled so PlayStaion and Xbox drivers are welcome to join and give the route a run on their console of choice. And also Game Pass subscribers can still get access to the game on either Console or PC if you’d prefer to try it out without buying outright.

I must still install this!

My 2c: R2 is a class you grind passed to get to the fun cars. In faster locations/stages, you tend to be in top gear all the time, and it feels a little monotonous. They also don’t slide as well as most other classes. And by that I mean, I WANT it to slide, that’s how you go fast. 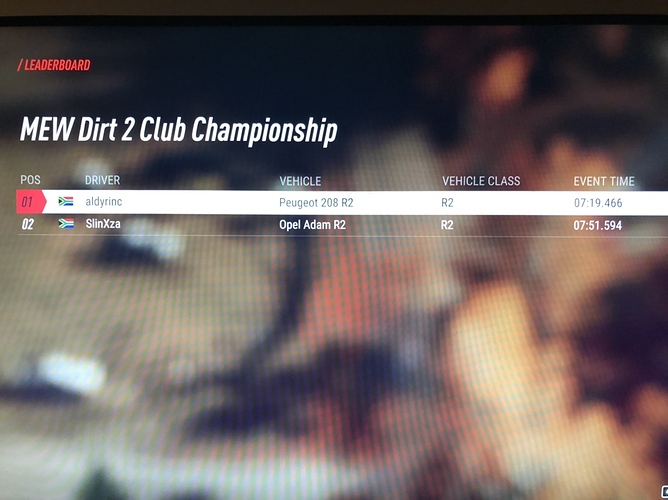